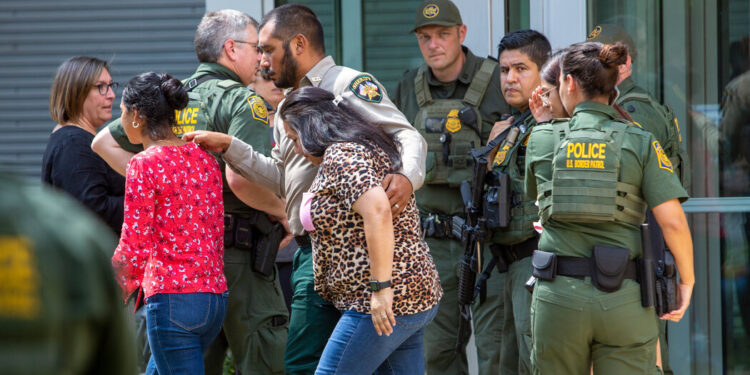 Along the more than 1,200-mile Mexico-Texas border, federal, state and local law enforcement agencies respond to each other’s requests for backup and conduct frequent joint operations.

It was therefore not uncommon for Border Patrol and Immigration and Customs Enforcement agents to respond to the desperate request for reinforcements from Uvalde’s police force on Tuesday. However, it was highly unusual for ICE agents to pull children out of school windows and for Border Patrol agents to play such a pivotal role in responding to a school shooter, firing the bullets that killed him.

The Uvalde Police Department called for tactical gear when they called for reinforcements, and members of the Border Patrol Tactical Unit, the agency’s version of a SWAT team, dropped what they were doing and went to the school, about 40 minutes drive from where they were. had worked on the southwestern border.

(While the border patrol’s mission is to secure the country’s international borders, it is allowed to operate up to 100 miles from a land or coastal border.)

Ultimately — about 35 minutes after members of the unit arrived at the school, Texas Department of Public Safety director Steven C. McCraw said at a news conference Friday — it was a Border Patrol Tactical Unit sniper, or BORTAC, who killed the gunman around 12:50 p.m.

At the press conference, Mr. McCraw said local law enforcement was in charge of the response and that sending law enforcement officers into the classroom where the gunman was for more than an hour was not the wrong decision.

Border Patrol established the BORTAC unit in 1984 in response to riots in immigration detention centers. Since then, agents in the unit have sometimes found themselves in high-profile situations. In April 2000, it was a gun-wielding BORTAC agent who grabbed Elián González, the Cuban boy at the center of an international custody battle. The officer grabbed the boy from his great-uncle’s arms after officers broke into the Miami home where Elián was staying.

The little-known unit, headquartered in El Paso, has about 250 agents. Its members usually operate along national borders, carrying out operations such as breaking into warehouses where smugglers hide drugs and weapons. Most of the people targeted by the unit are violent, with long criminal records. Its agents have enhanced Special Forces type training; they usually carry stun grenades and have sniper certifications. They arrived at Robb Elementary School on Tuesday with three ballistic shields designed to stop or deflect bullets and other projectiles.

Joining the unit involves a three-week selection process that includes constant physical and mental stress and food and sleep deprivation.

“We are looking for an overall combination of toughness, heart, intelligence and integrity,” said Mike Marino, a supervisory agent at BORTAC, earlier this year. “The aim is to estimate in someone what is normally immeasurable. You have to get a sense of someone’s true being.”

Members of the unit also operate around the world and have provided training and supported military operations in Afghanistan and Iraq.

The unit has been criticized for some of its actions, including its involvement in former President Donald J. Trump’s efforts to quash protests against police brutality in Portland, Oregon in 2020 following the assassination of George Floyd. In June, Mr. Trump sent 66 Specialized Unit agents, along with other federal law enforcement officers, to Pearland, Texas, for the funeral of Mr. Floyd, a black man who was murdered by a white Minneapolis police officer.

Mr. Trump also sent members of the unit to so-called refuges — where local police are instructed not to assist federal immigration police officers. They were sent to assist immigration and customs officers in the arrest of undocumented immigrants. Many saw the operation as a deterrent tactic, part of the Trump administration’s efforts to tackle illegal immigration.

While it’s rare for the BORTAC team to play such a pivotal role in responding to a local crime, it’s happened before.

In 2015, members of the team assisted in the manhunt for escaped convicted murderers Richard Matt and David Sweat in upstate New York. A member of the team shot and killed Mr. Matt, after the team found him hiding in the woods.

Many Border Patrol officers and officers from Customs and Border Protection, the parent company, live in the Uvalde area, which is part of the 245-mile Del Rio Border Patrol sector. The sector includes a station and a traffic checkpoint about an hour from the US border with Mexico. Parts of the Texas border are popular crossing points for undocumented migrants, and Border Patrol agents are everywhere, in their green uniforms.

Raul Ortiz, the border police chief, said that when his officers received the call about the shooting in Uvalde around 11:30 a.m. Tuesday, between 80 and 100 of them – both on and off duty – went to the school.

“We decided right away that we had to commit,” Mr. Ortiz told DailyExpertNews on Wednesday.

chef Victor Rodriguez of the McAllen, Texas Police Department said Border Patrol works so closely with local law enforcement that it is considered another law enforcement resource in the community.

Mostly, he said, incidents to which the border patrol responds together with local agents have to do with immigration.

In a situation like the shooting at a school in Uvalde, Mr. Rodriguez: “All local law enforcement agencies are responding and responding to see if they can help.”