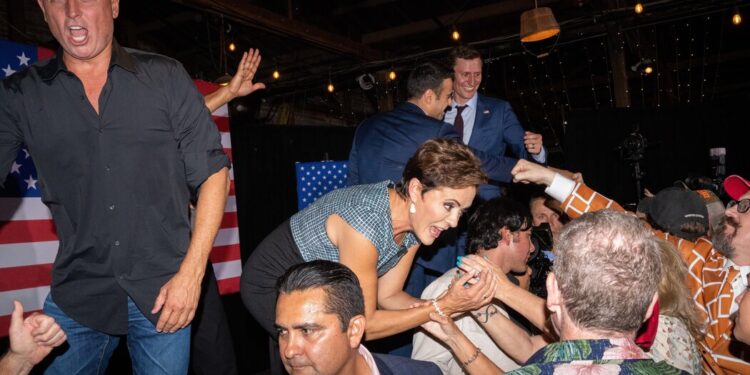 At the event held in Prescott by the Lions of Liberty, I asked Rose Sperry, the wife of the GOP state committee, which source of information she trusted most. She immediately replied, “OAN” – One America News, the Trump-touting network that reported daily on “America’s Audit” in Arizona, even as one of the show hosts, Christina Bobb, helped raise money for the operation and coordinated it directly between the Trump team and state officials.

A guest on OAN’s heavy rotation over the past year was Secretary of State Mark Finchem, who appeared on a broadcast last September to discuss the state’s Senate audit of the 2020 elections, accompanied by a chyron that read: “Exhibiting the Crime of the Century.” In July, I drove to Fountain Hills, where Finchem spoke at a candidate forum hosted by the Republican Women of the Hills. Finchem slid to the microphone with a pistol strapped conspicuously to his right hip. After describing his work history in law enforcement, the private sector, and politics in Arizona, he offered a different kind of qualification. With a grin, Finchem said: “The Atlantic released a piece yesterday: I am the most dangerous person for democracy in America.”

The article Finchem referred to did not refer to him as “the most dangerous person” — but rather as one of “dozens” of non-election candidates who pose “the greatest threat to American democracy in decades.” Regardless, the idea of ​​Arizona’s frontrunner GOP secretary of state as a threat to democracy was met with enthusiasm. Several women in the audience shouted “Whooo!” and applauded.

All over Arizona In the 2022 political season, Republicans’ proactive disdain for democracy became a chorus impossible to ignore in meetings, speeches, and rallies across the state. “By the way,” Charlie Kirk said during the Goodyear fundraiser, “we don’t have democracy. OKAY? Just a fact check. We are a republic.” At a meeting in Mesa I attended in July, which was held by the conservative group United Patriots AZ, the evening’s host, Jeffrey Crane, asked the audience, “Are we a democracy?” They responded loudly: “Nooooo! Republic!”

In each of the cases, the notion of democracy itself was brought forward not so much to win a scientific point, but rather to put it in the spotlight as an insulting object. When I told this emerging antagonism to McCain’s longtime director of state, Bettina Nava, she was genuinely stunned. Reflecting on her former boss’s conservatism, Nava told me, “The root of it all was his deep belief in the experimentation of democracy. When I was his director of state, we met everyone. And there were times when it was completely friendly and others where it was controversial. But he never shied away from it, because disagreement did not equal hatred.” Nava feared for the Republican Party she once served. “I never imagined this attack on democracy in my life,” she said. “I’ve asked myself: Will this movement die out with Trump? Or are we the ones who will die out? Are we the Whigs?”

Nava described a democracy that leaned on a notion of courtesy that was no longer there. As McCain’s grip on Arizona waned, Arizona conservatives gradually began to part ways with his beloved Democratic experiment. That experiment had worked in the past, as long as the democratic principles in question reverberated in favor of the ruling conservative base of the state. Arizona Republican lawmakers led the way in advocating early voting three decades ago, and Republican voters overwhelmingly chose to cast their ballots by mail, at least until the 2020 election. But by Primary Day in August Against all evidence, many Republicans in Arizona had come to view such conveniences as a trap set by a cunning left-wing conspiracy bent on winning Democratic victories.