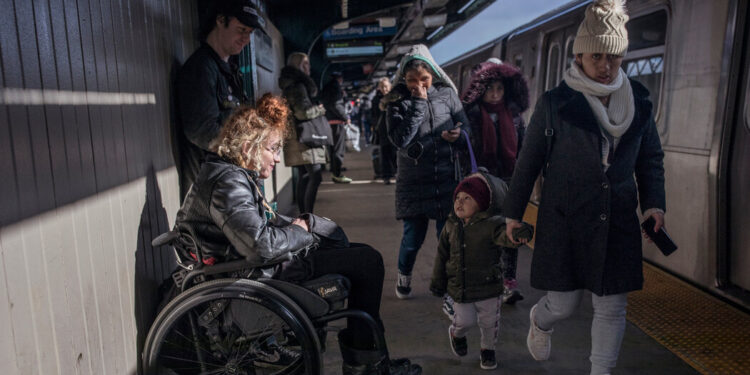 WASHINGTON — The Department of Transportation on Tuesday opened a program that allows cities to apply for federal funding to make public transportation stations more accessible to people with disabilities. not comply with the law.

The program, approved as part of the infrastructure law passed last year, would address a persistent problem in New York and other major cities across the country that were building transit systems long before the ADA was signed into law. The 1990 statute protects people with disabilities from discrimination on public transport and mandates that they have equal access to transport systems, but many stations built before it existed are largely inaccessible to people who use wheelchairs or have limited mobility.

The federal money, of which $343 million will be available this year, will allow recipient cities to renovate subway stations so that people who need an elevator, ramp or visual and audible aids can access rail systems.

“It’s one thing to push carriers to become compliant; it’s another thing to fund them and actually help them,” said Pete Buttigieg, the transportation secretary, in an interview to promote the launch of the transit program.

Mr Buttigieg said there were about 900 stations across the country that were not ADA compliant. The department quickly got underway to launch the program amid growing concerns about inflation, which has significantly increased the cost of renovation projects, he said, but has not yet set a date for when the first round of funding will be disbursed.

The need is especially great in New York, which has the most non-compliant stations in the country and where only a little over a quarter of stations comply with the law. The Metropolitan Transportation Authority recently vowed to make most of its subways accessible by 2055 as part of a settlement agreement in two class-action lawsuits.

“At a time when public transportation is subpar compared to prepandemic levels, we need to be as inclusive as possible,” said Danny Pearlstein, a spokesperson for Riders Alliance, a New York City-based transportation accessibility organization.

Other cities, including Boston and Chicago, are facing similar problems, according to the Department of Transportation.

According to data from the Bureau of Transportation Statistics, more than 25 million Americans had travel-limiting disabilities and 3.6 million did not leave their homes in 2018 because of them. The Federal Transit Administration said a quarter of the country’s train stations will remain inaccessible as of 2020, a representative of the Department of Transportation said.

“I’m just tired of hearing stories from friends or voters who can’t use public transportation because they have the audacity to get around in a wheelchair,” said Senator Tammy Duckworth, an Illinois Democrat, a double amputee and the first disabled woman elected to Congress, leading the effort to include the program in the infrastructure measure.

The program, which will eventually allocate a total of $1.75 billion over the next five years, kicks off at a time when transit agencies are plagued by declining revenues due to the pandemic. It’s a small piece of the infrastructure bill, which government officials, economists and business groups have called the most important step in a generation toward upgrading critical infrastructure systems in the United States.

Mitch Landrieu, a senior adviser to President Biden who leads implementation of the infrastructure bill, said the program was consistent with the government’s top priority in rolling out its funding: equity.

“Accessibility should never be a barrier,” said Mr Landrieu. “The impact of accessibility improvements extends beyond people with disabilities, as it also makes stations better for parents with strollers.”

When the ADA went into effect 32 years ago, only 6 percent of Chicago’s train stations were compliant. Now about 70 percent of stations have been updated, but the rest face technical and financial challenges, the Chicago Transit Authority said in a statement.

“Some were never designed to contain an elevator or other accessibility structure. Others are on small patches of land or in the median strip of highways,” the statement read. “Renovating those stations costs a lot of time and money.”

In Philadelphia, renovating older stations will cost about $4 billion, according to Kelly Greene, a spokeswoman for the Southeastern Pennsylvania Transportation Authority. SEPTA has created a schedule to make its stations ADA accessible, including projects that could be funded by the new program.

Jinny Kim, the director of the Disability Rights Program at Legal Aid, said the program would help prioritize accessibility even as transit systems have faced lower passenger fares during the pandemic.

“People with disabilities can continue using public transport because they depend on it,” she said. “If public transportation systems are inaccessible, they simply cannot access society.”