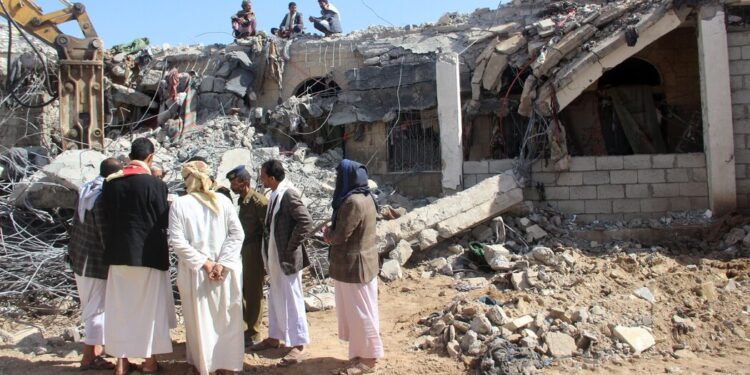 The strikes have hit hospitals, schools, buses and a funeral home, among others. On January 21, an airstrike on a Houthis prison killed at least 70 people and injured dozens more, according to Houthi officials and international aid groups.

More than 150,000 people, including nearly 15,000 civilians, were killed in the war, according to an estimate by the Armed Conflict Location and Event Data Project. The conflict has led to what the United Nations has called the worst man-made humanitarian crisis.

In February 2021, Biden said in a State Department address that he would end all US support for “offensive operations” in Yemen, including “relevant arms sales”. He and other US officials have not said publicly what that means. For now, new sales of air-to-surface projectiles have been suspended, officials say.

The Washington Post recently published an investigative report into how a significant number of airstrikes in Yemen have been carried out by fighter jets developed, maintained and sold by US companies and by pilots trained by the US military.

“It’s hard to say definitively that the US doesn’t support the offensive campaign there,” said Dalia Dassa Kaye, a Middle East expert at the Burkle Center for International Relations at the University of California at Los Angeles. “That remains a concern.”

“A lot of ammunition, supplies and things that are in the pipeline are still going on,” she added.

Bombs made by Raytheon are among the deadliest weapons the Saudi Arabia-led coalition has used in airstrikes that have killed civilians. The State Department cleared the sale of the ammunition, putting agency officials at risk of prosecution for war crimes, according to an internal legal memo from 2016.

In 2016, after an airstrike on a funeral home killed more than 100 people and injured hundreds, the Obama administration blocked Raytheon’s sale of about 16,000 guided ammunition kits to Saudi Arabia. The Trump administration resumed the sale as it strengthened ties with Saudi Arabia and the Emirates, another leading power in the war.