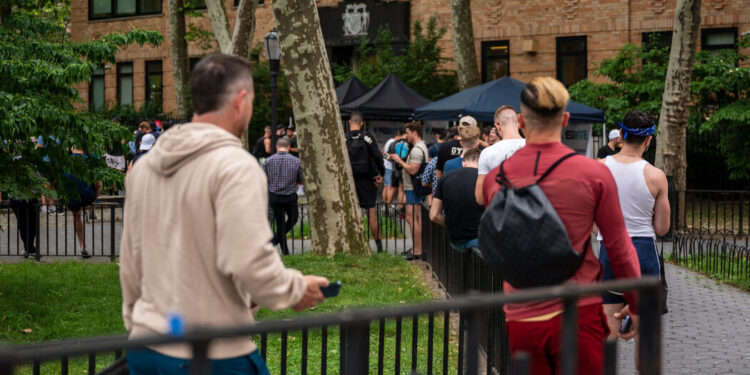 Clinics across the country will begin offering monkey pox vaccinations to anyone who may have been exposed to the virus, federal health officials announced Tuesday.

Until now, vaccinations were only offered to people with known exposure.

States will receive doses of a safer and newer monkeypox vaccine called Jynneos from federal stock, based on the number of cases and the proportion of the state’s population at risk for serious illness, officials said at a news conference.

State health authorities may also request deliveries of an older vaccine developed for smallpox, which is believed to also protect against monkeypox.

The Department of Health and Human Services will provide 56,000 doses of the Jynneos vaccine immediately and another 240,000 doses in the coming weeks. An additional 750,000 doses are expected to become available in the summer and a total of 1.6 million doses by the end of this year.

“This vaccine currently has a number of supply restrictions and for this reason, the current government vaccine strategy is prioritizing making it available to those who need it most urgently,” said Dr. Rochelle Walensky, director of the Centers for Disease Control and Prevention.

The older smallpox vaccine, called ACAM2000, is associated with serious side effects, including death, in people with weakened immune systems, pregnant women and older adults.

The new vaccination plan was soon criticized by experts, who said the campaign was too small and too slow to have any effect. The longer it takes to contain the monkeypox outbreak, the more likely the virus is to establish itself in the United States, especially among men who have sex with men, researchers warned.

“Many of us are concerned that the window is closing so we can eliminate monkey pox,” says Dr. Celine Gounder, an infectious disease expert and general public health editor at Kaiser Health News.

“If we don’t start vaccinating faster and more widely, we’re going to have a very hard time containing this,” she said. Ideally, tests and vaccines for monkeypox could have been offered at LGBTQ Pride events across the country to reach men at high risk of contracting the virus, Dr. Gounder to it.

Some experts said the plan was also unfair to men at risk who will not have access to the Jynneos vaccine, especially those who have HIV and cannot safely take the older smallpox vaccine.

“There won’t be enough to meet the need,” said Elizabeth Finley, communications director for the National Coalition of STD directors. “Additionally, without better testing capacity, a positive case contact strategy will fall flat.”

It’s also not clear what qualifies as a likely exposure, she added: “Do you know anyone who tested positive at the event, or do you just say, ‘Oh, I went to a rave and I want to be safe’? “

Many clinicians are concerned about side effects and scars of the older smallpox vaccine, as well as the misinformation and hesitation about vaccines they might cause, Ms Finley said. “We’ve heard clinicians say that under no circumstances would they give anyone ACAM2000,” she said.

The Jynneos vaccine, on the other hand, has never been used on this scale, and federal health officials said they would watch for unexpected side effects.

The government has so far provided more than 9,000 doses of Jynneos vaccine and 300 courses of antiviral treatments to 32 jurisdictions in the country, officials said Tuesday.

The European Union is adopting a similar plan, sending 5,300 of its 100,000 Jynneos doses to Spain, which has the most cases, followed by Portugal, Germany and Belgium. Other Member States receive doses in July and August.

The incidence of monkey pox has risen sharply in many European countries and in the United States.

As of June 28, there were 306 cases in 27 states and the District of Columbia, up from 156 cases a week earlier. The CDC has activated its emergency operations center to better monitor and respond to the outbreak, said Dr. walensky.

The reported numbers are likely underestimates, said Dr. Jay Varma, director of the Cornell Center for Pandemic Prevention and Response. “It’s pretty clear to me and I think many others that the epidemic is much larger in scope than what our official cases suggest,” he said.

Given the rising numbers, available doses are unlikely to be sufficient to meet demand. Washington’s health department offered 300 monkey pox vaccinations on Monday; the slots were filled in less than 15 minutes.

New York City, which had identified 55 cases of monkey pox on Tuesday, had 1,000 doses of the Jynneos vaccine on hand. The city’s health department began administering the vaccines to a single clinic in Chelsea, whose clientele is largely made up of wealthy white men who have sex with men.

The city offered the first doses at 12 noon on June 23† Less than two hours later, officials announced that the clinic could no longer accommodate walk-ins and had booked appointments until June 27. From Tuesday the city was still waiting to make more vaccine doses available.

“It started and then it stopped, and it started without anyone being prepared for it, and I’m not sure when it will come back,” said Keletso Makofane, a social network epidemiologist at the FXB Center for Health and Human Rights at Harvard. university.

“All this uncertainty doesn’t help us cultivate the confidence we need,” said Dr. Makofane.

Several experts also disagreed with the location, saying it would have been more equitable to offer the vaccines in clinics attended by black men with untreated HIV and limited access to health care.