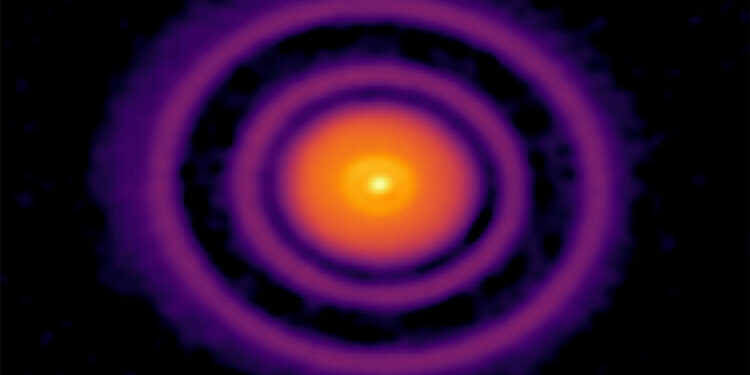 Over the past 30 years, astronomers have found more than 5,000 exoplanets, an eclectic menagerie of worlds far from our starry neighbourhood. The last one can only be a baby.

In the journal The Astrophysical Journal Letters on Tuesday, scientists announced compelling evidence for a world only 1.5 million years old, making it one of the youngest planets ever found, if not the youngest.

This world – 395 light-years from Earth in the constellation Ophiuchus – is so young that the building blocks of gas and dust still come together. This planet is a newborn baby cradled in the arms of its mother star.

“It’s like looking at our own past,” said Myriam Benisty, an astronomer at the Grenoble Institute of Planetology and Astrophysics in France and a co-author of the study.

Since the suspected planet is shrouded in the matter that makes it, further telescopic observations will be needed to confirm its existence. Assuming it’s not rocky waste masquerading as a planet, scientists can use it to better understand how worlds are made.

The deluge of newly discovered exoplanets has complicated or disproved long-standing theories of planet formation. But this baby planet’s location — firmly within the disk of primordial matter around its star — supports the idea that most planets spend much of their time growing up in a similar kind of nursery.

The discovery of the celestial kernel suggests that “all planetary systems share a common formation process,” said Anders Johansen, an astronomer at Lund University in Sweden who was not involved in the study. Despite the chaos of the cosmos, he said, “there’s actually a lot of order” when it comes to making planets.

The team of scientists used the Atacama Large Millimeter/submillimeter Array (ALMA), a collection of 66 simultaneous antennas in Chile, to gather evidence of this extraordinarily young world. Gas and dust revolve around certain stars in so-called circumstellar disks. This material, which clumps together to form planets in these disks, emits radio waves that ALMA can detect.

Last year, Dr. Benisty and her colleagues used ALMA to provide the first unambiguous detection of a halo of gas and dust orbiting an exoplanet: a circular planetary foundry still making the world it encases, and maybe some moons too.

For the latest study, they focused ALMA on AS 209, a star just slightly more massive than the Sun. Only 1.5 million years old, it has only recently started burning hydrogen – the awesome equivalent of a toddler uttering his first words.

The circumstellar disk of AS 209 was found to have several holes. And in one such hole, ALMA detected the radio wave signature of a planet-forming storm, gas believed to envelop a Jupiter-like world still under construction.

The exact age of the planet won’t be established anytime soon, but it will likely look very similar to its nascent star. But his childhood is not the only thing that arouses the interest of astronomers. It’s also mind-bogglingly distant from its star. Neptune, the outermost planet in our solar system, is located about 4.8 billion miles from the sun. This exoplanet is nearly 19 billion miles from its own star.

That raises questions about our own neck of the woods.

The size of the debris disk that forged Earth and the other planets is uncertain. “Maybe the disk was only slightly larger than Neptune’s orbit, which is why Neptune is the outermost planet,” said Dr. Johansen. But perhaps our center of planet-making matter was more like AS 209’s. If so, “we also can’t rule out the possibility that our own solar system has a planet beyond Neptune,” he said — perhaps the hypothesized planet 9 some astronomers have. suspect that it hangs out in distant darkness.

In the coming days, the James Webb Space Telescope will determine the mass of the newborn planet and study its atmospheric chemistry. And by painting a detailed portrait of one of the youngest worlds known to science, these observations will bring us all closer to answering the ultimate question, said Jaehan Bae, an astronomer at the University of Florida and an author of the study. : where do we come from?”