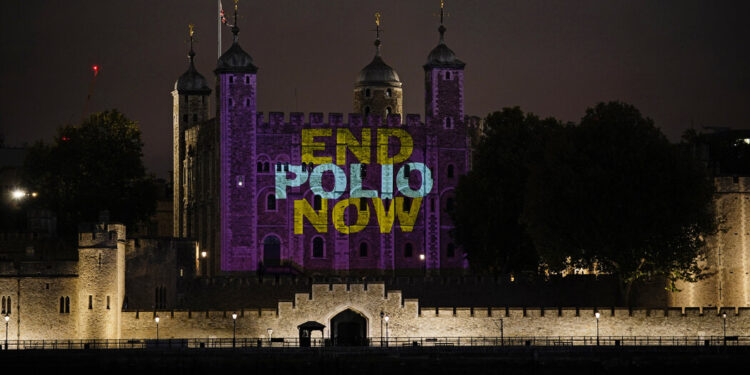 LONDON – Every child aged 1 to 9 in London should receive a booster dose of polio vaccine, UK health authorities said on Wednesday, after traces of the virus showed up in sewer samples in a quarter of boroughs, although there were no individual cases. of the disease have been reported.

Health authorities declared a national incident in June – a designation used to highlight the potential seriousness of the problem – after sewer samples suggested the virus was spreading in London. Now, officials said, samples indicated it had spread beyond a tight network of a few individuals.

Normally, routine checks on sewers in Britain pick up the virus once or twice a year, the UK Health Security Agency said in a statement, but between February and July, 116 samples of type 2 poliovirus were detected in samples from eight London boroughs. in the north and east of the city.

“No cases of polio have been reported and for the majority of the population, who are fully vaccinated, the risk is low,” said Dr. Vanessa Saliba, an epidemiologist with the health agency, in the statement.

“But we know that the areas in London where the polio virus is transmitted have some of the lowest vaccination rates. Therefore, the virus is spreading in these communities and those residents who are not fully vaccinated are at greater risk.”

Polio, which can cause paralysis, was once a much-feared childhood disease, but has been virtually eradicated through vaccination. Britain’s last known case was in 1984, and a case discovered last month in Rockland County, NY, was the first in the United States in nearly a decade. The wild polio virus has been eradicated from every country in the world except Afghanistan and Pakistan.

The spores found in London’s sewers, as is the case in New York state, were related to polio virus derived from the oral polio vaccine, which uses a live attenuated form of the virus that immunized people shed for a short time.

In rare cases, in communities with low vaccination coverage, the virus can spread. In very rare cases — generally where vaccination protection is low enough that it has been circulating for at least a year, according to the World Health Organization — it can gradually mutate back into a form that can paralyze.

Most London sewer samples contained some form of virus that is still very close to the harmless version in the vaccine, the UK Health Security Agency said, but a few had enough mutations to cause serious illness.

Oral polio vaccination is no longer routinely given in Britain, which now, like the United States, prefers a vaccine that uses inactivated – essentially dead – virus.

The UK Health Security Agency said childhood vaccination rates in London were lower than in the rest of the country. Recent figures in London suggest a broader vaccination coverage of 86.6 percent, according to the Global Polio Eradication Initiative, which should generally be enough to prevent widespread transmission of the virus.

“While the majority of Londoners are protected against polio, the NHS will soon be contacting parents of eligible children aged one to nine to offer them a supplemental dose to ensure they have maximum protection against the virus.” have,” said Jane Clegg, the chief nurse for the UK’s National Health Service in London, adding that medics were already in contact with parents and carers of children whose vaccinations were not up to date.

The UK Health Security Agency said on Wednesday it is working closely with the World Health Organization, as well as health agencies in New York and Israel, to investigate links between the polio virus outbreak in London and recent episodes in Israel and the United States.

Many countries worldwide, including the United States and Israel, already offer an additional polio vaccine booster as part of their childhood vaccination schedule. Britain routinely offers a pre-school booster vaccine, including polio, to children aged 3 years and 4 months.

The UK health agency also said on Wednesday it had already increased sewerage surveillance across London and 10 to 15 sites across the country. investigated to determine whether the polio virus had spread outside London.