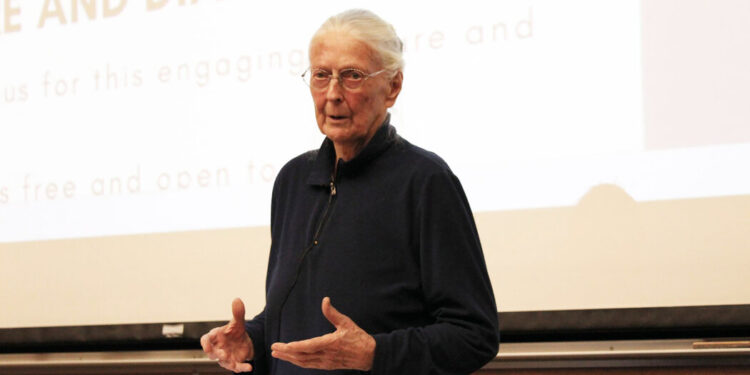 While she was first adopting her approach as an educated, middle-class heterosexual mother and writing about it in feminist terms, Dr. Smith saw it as a resource available to anyone marginalized by the dominant modes of inquiry of conventional sociology. Indeed, later scholars have used her methodology to study things as different as the lives of gay men and the way police treat black teenagers. It was, she said, “a sociology for people.”

Dorothy Edith Place was born on July 6, 1926 in Northallerton, a small town in the north of England. Her father, Tom Place, was a timber merchant. Her mother, Dorothy Foster (Abraham) Place, was a university-trained chemist who had been active in the women’s suffrage movement as a young woman. She spent time in jail for breaking windows at Harrods department store in London, along with Sylvia Pankhurst. When Mrs. Place left the movement in the 1920s, her parents bought her a small farm, where she met her future husband.

Young Dorothy grew up amid a brilliant brood: her brother Ullin became a renowned philosopher, while another brother, Milner, became a widely published poet. All three, as well as another brother, David, went to boarding school, although Dorothy’s education was primarily aimed at preparing her for motherhood.

She resisted that path as much as she could. She completed a two-year course in social work at the University of Birmingham and then moved to London, where she became active in Labor Party politics. She worked as a secretary at a publishing house. To boost her career prospects, she applied to study at the London School of Economics. She was 25 when she was hired.

She received her bachelor’s degree in sociology in 1955. Along the way, she discovered Marxism and the work of the French philosopher Maurice Merleau-Ponty, both of which would greatly influence her work; that same year, she married an American, William Smith, who was studying at the GI Bill in London.

They both attended graduate school at the University of California, Berkeley, where she received her PhD, also in sociology, in 1963. Nine months after the birth of her second son, she defended her thesis. Around that time, her husband left the family.