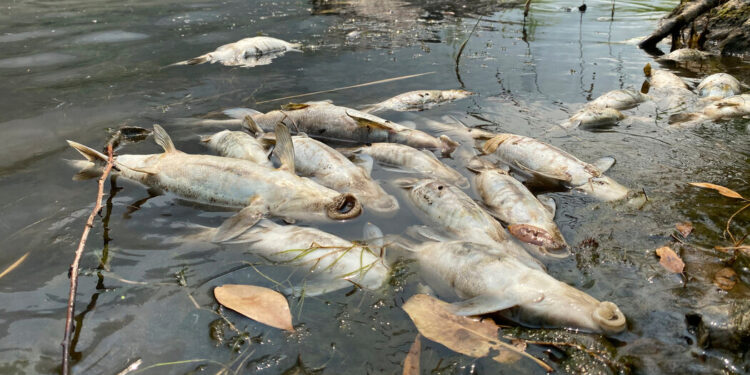 As a deadly fire continued to burn in Northern California’s Klamath National Forest last week, Kenneth Brink, a local fisherman, counted dead fish in a river that had turned to the consistency of “chocolate milk.”

Mr. Brink, 45, a member of the Karuk tribe, lives in Happy Camp, a town of less than 900 people on the Klamath River, in Siskiyou County, California. The city is near the Oregon border. On Friday, he drove some 20 miles upriver where he made the grim discovery: thousands of dead sucker fish, salmon and trout, many floating belly-up.

The McKinney fire started on July 29 and has exploded to more than 60,000 acres, killing four people and becoming the largest fire in California to date this year. According to local tribal leaders, the fire also led to the massive fish kill in the Klamath River, which runs more than 250 miles from southern Oregon, through Northern California and to the Pacific Ocean.

On Tuesday, up to two inches of rain fell on areas burned by the fire, sending a stream of debris of burned soil, rocks and crashed wood into the river, said Mike Lindbery, a public information officer for the McKinney fire.

That debris turned into a plume of brown “silt” that made its way downstream, according to representatives of the tribe. A water quality monitoring station on the river recorded dissolved oxygen in the water at zero on both Wednesday and Thursday, she added. Marine animals usually survive in water with about eight milligrams of oxygen per liter, but the oxygen content in that part of the river made it impossible for the fish to survive.

“It’s just sterilizing the entire river in that range,” said Craig Tucker, a policy advisor for the tribe. Whether the debris flow would affect the migration of the Chinook salmon, which usually begins in the fall, was unknown, he added.

On Sunday, the McKinney fire, which led to evacuations for thousands of people, was 40 percent under control, authorities said in a fire report. But Mr Lindbery, the public information officer, warned that dangerous conditions could reverse some of that progress in the coming days.

Gusts of wind, low humidity and a “very unstable atmosphere” over the fire, he said, can create conditions where embers can fall well beyond the line of fire. There was also a possibility that a huge cloud known as a pyrocumulonimbus could develop and eventually collapse, causing erratic winds, he said.

Mr Brink, the fisherman, noted that all the fish that were killed are of cultural importance to the local tribes living near the river. He said he was frustrated with the region’s history of forest management, which in the past had banned local tribes from performing cultural burns to tame the landscape.

“It’s chaos,” he said of the fire’s impact on his community of Happy Camp, which is within about 35 miles of two fires: the deadly McKinney fire and the Yeti fire, which has grown to nearly 8,000 hectares.