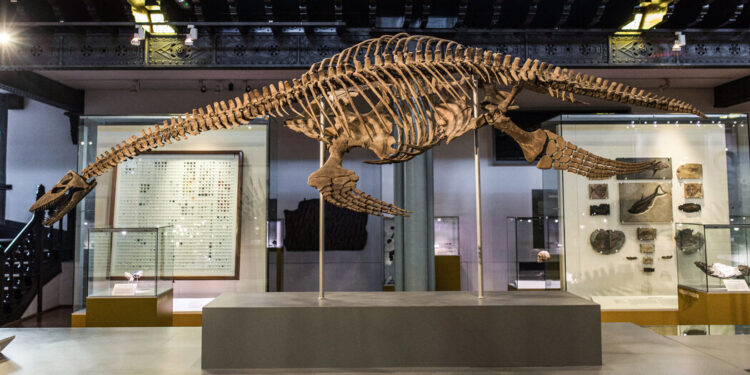 LONDON — Millions of years before the first (alleged) sighting of the Loch Ness Monster, populations of giant reptiles swam through Jurassic seas in areas that are now Britain. Known as plesiosaurs, these long-necked creatures that could grow up to 40 feet in length were thought to live exclusively in oceans.

But a discovery published in a paper last week by researchers in Britain and Morocco added weight to a hypothesis that some Loch Ness monster enthusiasts have long clung to: that plesiosaurs live not only in seas, but also in fresh water lived. That could mean, they reasoned excitedly, that Nessie, who is sometimes described as a plesiosaur, could actually live in Loch Ness, a freshwater lake.

Local newspapers have celebrated the find. It “further credits the idea that Nessie has been able to survive and even thrive in Loch Ness,” according to an article on page 32 of the Inverness Courrier, a biweekly newspaper in the Scottish Highlands. “Loch Ness Monster bombshell,” blared a headline from the British Daily Express tabloid. “The existence of the Loch Ness Monster is ‘plausible’,” headlines read in The Scotsman, The Telegraph and elsewhere, seizing on a sentence in the University of Bath’s announcement of the study’s findings.

This isn’t the first study to show that plesiosaurs lived in freshwater. “This new study just provides additional evidence for certain members of this group living in freshwater,” said Dean Lomax, a paleontologist and visiting scientist at the University of Manchester. “We’ve always known this.”

But Nick Longrich, the study’s lead author, said his team had one of the stronger cases for it because they found fossils of 12 plesiosaurs, proof that it wasn’t just one plesiosaur that roamed in freshwater and died there.

dr. Longrich, a paleontologist and evolutionary biologist at the University of Bath, said it was “completely unexpected” to find the fossil of a plesiosaur that had lived in a 100-million-year-old freshwater river system that is now the Sahara.

During a research trip to Morocco, he was searching a box in the back room of a store when he discovered a “sort of thick” bone, which turned out to be the arm of a 1.5-meter-long baby plesiosaur. dr. Longrich paid the cashier no more than 200 Moroccan dirhams, or about $20, after negotiating to lower the price, and returned the fossils to Britain for further examination.

“Once we started looking, the plesiosaur started showing up everywhere,” he said. “It reminds you that there’s a lot we don’t know.” (The fossils will be returned to museums in Morocco at a later date, he said.)

When news of the study made headlines last week, some Nessie fans were hopeful. George Edwards, who for many years skippered a Loch Ness tourism boat called the Nessie Hunter, said the new study showed for him how creatures could adapt to survive in new environments — and that the world is full of mysteries. Take the coelacanth, a bony fish thought to have gone extinct millions of years ago but found in 1938 by a South African museum curator on a fishing boat. “Look, they found them, alive and well,” said Mr. Edwards. “Everything is possible.”

Mr Edwards said he had often seen inexplicable creatures in Loch Ness: “There must be a family of them.” From what he’s seen, the creatures have large arched backs, no fins, and are somewhat reminiscent of a plesiosaur.

But there’s one detail that some Nessie aficionados have overlooked in their embrace of the plausibility of Nessie’s existence: Plesiosaurs went extinct at the same time as dinosaurs, some 66 million years ago. Loch Ness was only formed about 10,000 years ago and before that it was ice.

Valentin Fischer, an associate professor of paleontology at the University of Liège in Belgium, said it is currently impossible for a marine reptile like the Plesiosaurus to live in Loch Ness.

The first recorded sighting of Nessie dates back to the sixth century AD, when the Irish monk St Columba is said to have driven a creature into the water. But in the 20th century, worldwide interest revived after a British surgeon, Colonel Robert Wilson, took the most famous photograph of the Loch Ness Monster in 1934. Sixty years later, the photo turned out to be a hoax.

Steve Feltham, a full-time monster hunter who has lived on the shores of Loch Ness for three decades, said the British-Moroccan research was interesting but irrelevant to his quest. Since it became clear that the famous 1934 photo of Nessie was fake, he no longer believes Nessie was a plesiosaur. Plesiosaurs have to come up for air, so he thinks he would have seen it during the 12 hours a day he scours the lake. Instead, he scans the water for giant fish that look like a boat turned upside down.

“I have a hard time thinking of a bona fide Nessie hunter who still believes in the plesiosaur,” he said. “That’s where the hunt started.”