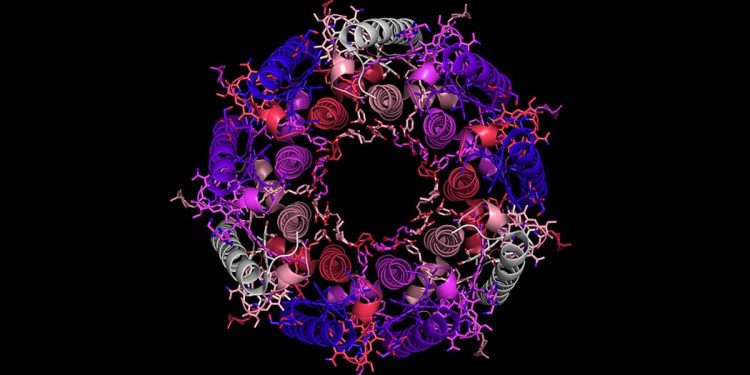 Symmetry abounds in nature. It is present wherever mirror images are repeated, such as in the right and left halves of elephants or butterflies, or in the repeating patterns of petals and starfish arms around a central point. It even hides in the structures of little things like proteins and RNA. While asymmetry certainly exists in nature (like how your heart is to one side in your chest, or how male fiddler crabs have one enlarged claw), symmetrical shapes crop up too often in living things to be just random.

Why does symmetry predominate? Biologists aren’t sure – there is no natural selection reason for the prevalence of symmetry in such varied life forms and their building blocks. Now it looks like a good answer could come from computer science.

In a paper published this month in the Proceedings of the National Academy of Sciences, researchers analyzed thousands of protein complexes and RNA structures, as well as a model network of molecules that control how genes turn on and off. They found that evolution tends toward symmetry because the instructions to produce symmetry are easier to embed and follow in the genetic code. Symmetry is perhaps the most fundamental application of the adage ‘work smarter, not harder’.

“People are often quite amazed that evolution can create these incredible structures, and what we’re showing is that it’s actually easier than you might think,” said Ard Louis, a physicist at the University of Oxford and an author of the study.

“It’s like we’ve found a new law of nature,” said Chico Camargo, a co-author and lecturer in computer science at the University of Exeter in England. “This is beautiful because it changes how you see the world.”

dr. louis, dr. Camargo and their colleague Iain Johnston began their exploration of the evolutionary origins of symmetry when Dr. Johnston was working on his PhD and running simulations to understand how viruses form their protein shells. The structures that emerged were highly biased toward symmetry and were much more common than pure randomness would allow.

The researchers were surprised at first, but it made sense: The algorithms to produce simple, repeating patterns are easier to execute and harder to mess up. dr. Johnston, now at the University of Bergen in Norway, likens it to telling someone how to tile a floor: It’s easier to instruct you to lay down repeating rows of identical square tiles than to explain how to make a complex mosaic.

Over the next decade, the researchers and their team applied the same concept to basic biological components, looking at how proteins assemble into clusters and how RNA folds.

“The shapes that are more common are the simpler ones or the less crazy ones,” said Dr. Camargo.

By presenting RNA and proteins as tiny input-output machines that carry out algorithmic genetic instructions, the propensity for symmetry is explained in a way that Darwinian survival of the fittest has not been able to do. Since it is easier to code instructions for building simple, symmetrical structures, nature is given a disproportionate number of these simpler instruction sets to choose from when it comes to natural selection. That makes evolution a bit like a “biased dice loaded game,” said Dr. Camargo, and produced disproportionate symmetry for its simplicity.

Although their paper focuses on microscopic structures, the researchers believe this logic extends to larger, more complex organisms. “It would make a lot of sense if nature could reuse the program to produce a petal instead of having a different program for each of the 100 petals around the sunflower,” said Dr. Johnston.

While there is still a gap between demonstrating the statistical preference for microscopic symmetry and explaining the symmetry we see in plants and animals, Gábor Holló, a biologist who studies symmetry at the University of Debrecen in Hungary, says he is enthusiastic about the results of the new article. “To explain how such an inherent and so universal feature shows up at all in evolution, in nature, that’s something,” said Dr. Holló, who was not involved in the investigation.

Similarly, Luís Seoane, a researcher on complex systems at the Centro Nacional de Biotecnologia in Spain, who was also not involved in the study, praised the work as “as legitimate as it gets.”

“There’s a war going on between simplicity and complexity, and we’re living on the edge of it,” said Dr. seoane. The universe tends to become more and more arbitrary, he added, but these simple, symmetrical building blocks help make sense of that complexity.