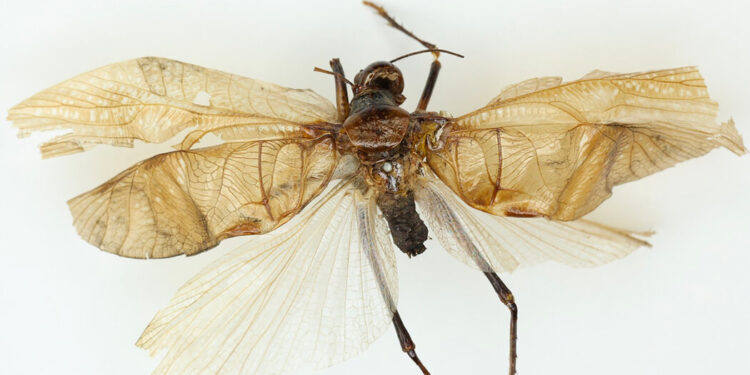 Whether it’s the deafening drone of a cicada, the blaring hum of a bee or the incessant chirping of a cricket, insects are a staple of the summer score. And arthropods have been making rackets for hundreds of millions of years. One of the noisier groups was the Prophalangopsidae, a series of singing insects that became mainstream during the Jurassic period, when some 100 species cried out. Although related to modern crickets and katydids, these ancient arthropods left few direct descendants, making it difficult to decipher what these Mesozoic maestros sounded like.

However, a unique specimen of Prophalangopsis obscura can help replay these lost sounds. The most enigmatic of the eight modern Prophalangopsid descendants, P. obscura has never been seen in the wild and is known only from a single specimen discovered somewhere in India in 1869 and now housed in the Natural History Museum in London.

But according to Charlie Woodrow, a Ph.D. student at Lincoln University in England, possesses the kind of sound-producing equipment almost indistinguishable from its fossilized ancestors, making it likely that P. obscura hits the same notes as its extinct relatives. In fact, his recent study on the insect, published Wednesday in the journal PLoS One, argues that P. obscura’s song is similar to the tunes broadcast by Prophalangopsids for over 100 million years.

To mimic the sound of P. obscura, Mr. Woodrow and his colleagues focused on the specimen’s wings, which resemble crumpled parchment paper. “The sound system produced is all based on the morphology of the wings,” says Mr. Woodrow, who specializes in bioacoustics. In many insects, the wings act as both the instrument and the speaker system. To generate chirps, crickets and katydids rub their forewings together, scraping a serrated vein against a smooth counterpart on the opposite wing, similar to a spoon raking a washboard. Specialized wing cells then amplify the grid vibrations to chase potential mates or frighten enemies.

While the wings of the P. obscura specimen were in tatters, the sound-producing parts remained largely intact. To analyze them, the researchers scanned them with lasers to create digital 3D models. They then ran the models through a series of sonic tests to mimic the sound, comparing the wing shape to that of modern singing relatives, such as katydids, to fine-tune the song’s structure.

They were left with a spluttering chirp reminiscent of squeaky sneakers. The number hovered around 4.7 kilohertz, a frequency slightly higher than the smoke detector’s standard beep. This frequency is much lower than the sounds emitted by hump-winged grigs, another modern Prophalangopsid found in the Rockies that looks like muscular crickets. When startled, grigs emit beeps that rise in ultrasonic frequencies around 13 kilohertz to deter predators.

According to Fernando Montealegre-Z, one of Mr. Woodrow’s colleagues at Lincoln University and an author of the study, this low frequency came in handy, as most prehistoric Prophalangopsids were likely ground-bound. “That frequency is the perfect frequency to use in vegetation close to the ground — it propagates very far without interference,” he said. In comparison, many shrill hump-winged grigs broadcast their songs from higher branches in trees to keep their sounds from bouncing off the vegetation.

However, mysteries linger about what these insects sounded like during the days of the dinosaurs. According to Kevin Judge, an entomologist who studies hump-winged grigs at MacEwan University in Canada, fossils and morphology can only tell researchers so much about how insects organized their songs. To find out exactly how P. obscura structures its call, the researchers would need to observe a living one in the wild. “Do they sing long, trills and buzzes or are they chirpers?” said Dr. Judge, who was not involved in the new study. “There’s no physical evidence of that because it’s all under neuromuscular control.”

Even if the findings are more like a remix of the Jurassic’s greatest hits, the authors believe figuring out what P. obscura sounded like could help pinpoint other individuals. For example, computer algorithms could help pick their low-frequency songs from recordings from forests in northern India, where the only copy is likely collected.

dr. Judge agreed that knowing what to listen for was a good starting point. “The whole idea of ​​recreating the song is to be able to listen to it,” he said.