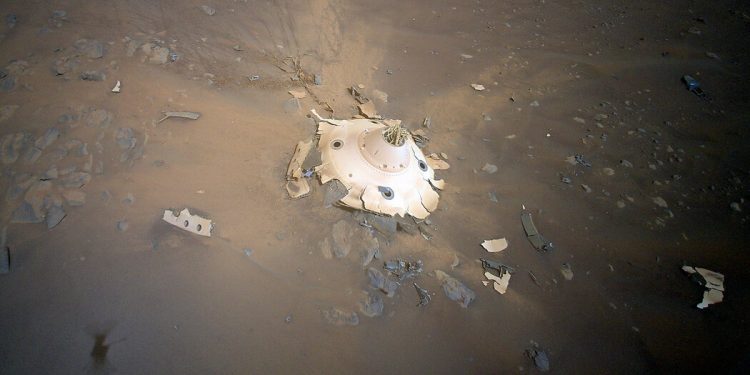 The object resembles a flying saucer that crashed on Mars.

And indeed it is.

But it’s not from aliens.

Instead, the wreckage is the work of NASA, a component called a backshell that came off during the Perseverance rover’s landing on the red planet’s surface in February 2021.

“There’s definitely a sci-fi element to it,” Ian Clark, an engineer who worked on Perseverance’s parachute system, said of photos released Wednesday. “It radiates otherworldly, doesn’t it?”

On its 26th flight last week, Ingenuity took 10 photos during its 159 seconds in the air over a distance of 1181 feet. Those show that backshell, or the top half of the landing pod that protected perseverance and ingenuity as they plunged through the Martian atmosphere. Still attached is the 70-foot-wide parachute that slowed the vehicles’ descent.

The parachute and backshell came off the rover at an altitude of 2.3 miles. A rocket-powered system called Skycrane brought Perseverance to the surface the rest of the way, as the backshell and parachute landed more than a mile to the northwest.

The backshell, nearly 15 feet in diameter, hit the ground at about 78 miles per hour, partially shattering. Otherwise everything appears to be in good condition – no obvious signs of charring. The parachute appears intact, as do the suspension lines connecting the parachute to the backshell. But engineers have just begun to examine the new images in detail.

“They say a picture is worth a 1,000 words, but it’s also worth an infinite amount of technical insight,” said Mr. Clark.

Studying the remains of the backshell could be useful for NASA’s next big Mars adventure — bringing rocks and soil from Mars back to Earth for more detailed exploration. That mission, called Mars Sample Return, should place two landers on the surface — a rover to collect rock samples to be drilled by Perseverance, and a small rocket to launch the monsters into orbit so that another spacecraft can be picked up. to bring back to Earth.

Kenneth Farley, the mission’s project scientist, was fascinated not only by the “truly spectacular” images of the hardware, but also by where the hardware landed.

“Remarkably, this wreck ended up at the contact between the two rock formations on the crater floor,” said Dr. Farley in an email. The two formations, called Seitah and Maaz, are both made up of volcanic rock. But they are very different in composition. Seitah is rich in olivine deposited from thick magma, perhaps a lava lake. Maaz, which is on top and thus likely younger, has a composition similar to most basaltic lava flows — full of minerals known as pyroxene and plagioclase, but with little or no olivine.

A line of rocks running from the backshell to an area just next to the chute is where the two formations meet. “We want to know how these rocks could be related to each other,” said Dr. farley.

The mission’s scientists were so intrigued by the geology that Ingenuity again crossed the line between Seitah and Maaz on Sunday. Those photos will be sent back to Earth on Thursday.

Perseverance has been busy on his rides too. On April 2, it took a series of photos of the small Martian moon Phobos passing in front of the sun, a partial eclipse by the potato-like object. Detailed measurements of Phobos’ orbit provide hints about Mars’ internal structure.