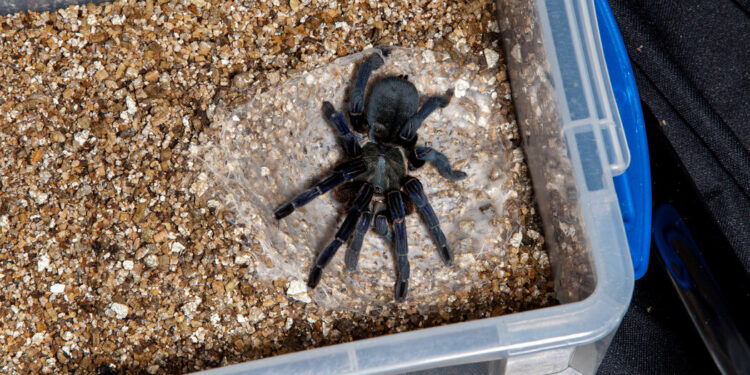 At first, it looks like any other unboxing video on YouTube: A young man presents the viewer with a sealed box, expresses his excitement at what might be inside, and peels off the packaging tape.

But instead of pulling out a collectible or signature sneaker, he carefully unwraps seven live tarantulas, zooming in close enough to reveal the wispy bristles on their multi-jointed legs.

The tarantulas were the culmination of a mail-order spider “mystery box,” an organic grab bag that has become a popular offering in the booming arachnid economy, much of which now, fittingly, exists on the web.

“You can buy a mysterious gift from mysterious spiders,” said Alice Hughes, a conservation biologist at the University of Hong Kong. “It’s like getting your pack of Pokémon cards: you might get a super rare one, or you might get a bunch of random stuff.”

In a new paper published Thursday in Communications Biology, Dr. Hughes and her colleagues shed light on the largely unregulated trade of creatures that prefer to lurk in the dark. Their analysis of online sales listings yielded more than 1,200 species of spiders, scorpions, and other arachnids; only 2 percent of them are subject to international trade regulations, the researchers report.

“Arachnids are massively traded,” said Dr. Hughes. “And it seems to be going completely under the radar.”

Many organisms on the arachnid market appear to have been wild-caught rather than captive-bred, the study found, and the ecological impact of their harvest remains unknown.

“They’re just randomly removed in large numbers,” said Anne Danielson-Francois, an arachnologist and behavioral ecologist at the University of Michigan-Dearborn who was not involved in the new research. She added: “They are not this unlimited resource.”

While the wildlife trade poses a major threat to the planet’s fauna, regulations and public attention focus primarily on familiar, charismatic animals, such as elephants, parrots and sea turtles.

But there is a high and growing demand for invertebrates, experts said, and arachnids are popular pets. They’re a cinch to ship – “You can literally mail an envelope of little spiders,” said Dr. Hughes – and many species are relatively easy to care for.

“They don’t bark, they don’t need to go for walks — you can put a simple arachnid in a five-gallon tank on your shelf,” said Ernest Cooper, an independent expert on wildlife trade in Canada. “They have fascinating behavior. Some have bright colors.”

To learn more about the magnitude of the global arachnid trade, the authors of the new paper used a handful of search terms — “spider,” “scorpion,” “arrachnid” — in nine languages ​​to identify websites that may contain the animals. to sell.

After eliminating stores that sell spider excavators or Spider-Man collectibles, they scraped the data from the remaining sites to generate a list of arachnid species for sale online. (They also used the Internet Archive to find historical sales listings dating back to 2002.)

In these locations, the study found a total of 1,248 arachnid species that are currently or previously for sale. The list included some eye-catchers, such as the huge Asian bush scorpion and the striped Costa Rican zebra tarantula. But it also had some surprises, like Dad’s leggy spiders, common denizens of basements across America.

“They’re literally balls of legs — little balls of legs,” said Caroline Fukushima, a postdoctoral researcher at the Finnish Museum of Natural History and author of the article. “You can’t impress anyone with that.”

Compared to the extensive online listings, a U.S. Fish and Wildlife Service trade database contained just 267 arachnid species, the scientists found. The Convention on International Trade in Endangered Species of Wild Fauna and Flora, or CITES, which regulates international trade in a variety of plant and animal species, only had 30 species in its trade database.

(Individual nations can have their own rules, and U.S. authorities sometimes intercept arachnids that arrive without proper paperwork. Dr. Danielson-Francois was once the recipient of a box full of confiscated emperor scorpions that officials wanted to unload.)

The online marketplace is moving fast, with new arachnid species appearing in stores not long after they’re first described by scientists. Nearly 200 of the species discovered since 2000 are already traded; dozens were available within a year or two of them being first described, the researchers found.

“That suggests that people go to the field and find something new and just make the most of it and then put it up for sale online,” said Dr. Danielson-Francois.

Collectors can also purchase species that are not yet known to science. dr. Hughes and her colleagues identified about 100 species of arachnids in the trade that were consistently described as variants of known species, such as the “Vietnam blue tarantula.” (“Not for beginners,” the site Reptile Rapture warns. “Very defensive.”) But in many cases, these “variants” could actually be several new species, the scientists said.

In a separate analysis of the U.S. Fish and Wildlife records, the researchers found that about two-thirds of individual arachnids were caught in the wild. Many were shipped from countries not known to be indigenous, suggesting they may have been laundered across national borders, said Dr. Hughes.

The study has limitations. It’s not an exhaustive inventory of all arachnid species available for purchase, and not all online listings can translate into actual sales, outside experts warned.

And the ecological effects of this trade are difficult to determine, partly because so little is known about arachnids. “We often don’t fully understand the distribution of many of these species, let alone where they occur, what they need to survive,” said Sarina Jepsen, who leads the endangered species program at the Xerces Society for Invertebrate Conservation. an international non-profit.

But many arachnid species seem to be restricted to small geographic regions; some, such as tarantulas, mature slowly and have a long life. “You can think of them as the rhinoceros or the panda of the arachnid world,” said Dr. Danielson-Francois. “It is possible for local populations to go extinct if they are poached.”

In another recent study, Cornell University researchers found that multiple species of endangered tarantulas were being sold online.

Protecting arachnids needs more of everything, experts said: more regulation, more research into arachnid ecology and more data on exactly which species are imported to and exported from specific countries — and in what quantities.

“Are there any species we should be particularly concerned about?” dr. Cooper said. “Are there species that are hammered in large numbers every year? Every species is not equal.”

In the meantime, experts encouraged arachnid enthusiasts to do their homework before acquiring new organisms, to make sure they know where the animals came from and whether they were captive-bred or wild-caught.

“As end consumers, we need to think about our role in helping to protect these animals we love so much,” said Dr. Fukushima.