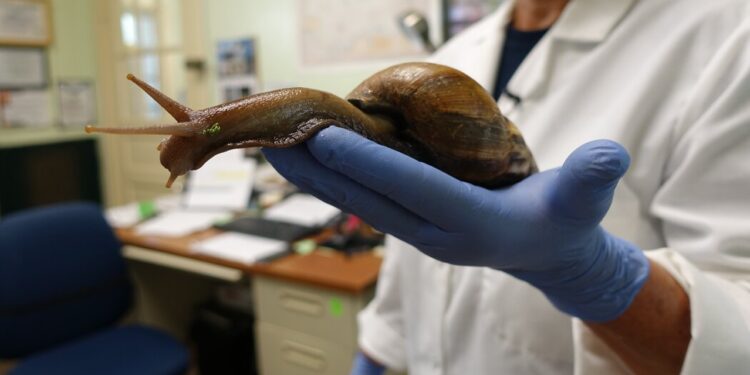 MIAMI — The giant African land snail, which can grow to the size of a fist and carries a parasite that causes meningitis, was declared eradicated in South Florida last year after a decade-long battle between humans and pests.

The dreaded snails — known as GALS to connoisseurs of invasive species — were spotted by a gardener in Pasco County, north of Tampa, in June, the first time a population of them has been discovered outside of South Florida.

To contain them, state officials this week quarantined part of Pasco County in the New Port Richey area. Plants, yard waste, debris, compost or building materials should not be brought outside without permission for fear of the sticky mollusks spreading. The quarantine extends for a radius of about half a mile from the identified snail population and may change or grow as more snails are found.

The snails’ return was a surprising and unwelcome development in a state where the wildlife routinely makes headlines — a record-breaking 215-pound Burmese python was captured in the Everglades late last year — and where invasive species routinely wreak havoc. During a particularly rainy spring a few years ago, exterminators in Palm Beach County received a spate of calls about Bufo toads, whose toxin is so poisonous it can kill dogs, which were found mating in swimming pools.

“Pasco County is a lot drier than South Florida because you have such a large area of ​​scrubland,” said Bill Kern, an associate professor at the University of Florida who specializes in nuisance wildlife management. Giant African land snails “generally like moist and dense vegetation.”

“Of course in areas that are irrigated, such as in nurseries or in home landscapes, they will be perfectly happy,” he added.

Giant African land snails are “one of the most invasive pests on Earth,” according to the Florida Department of Agriculture and Consumer Services. They eat more than 500 species of plants — and also feed on stucco, “as a source of calcium.” They hide in cool, moist places during the day, feed at night, and lay many thousands of eggs throughout their lives. Some snails can grow up to eight inches long and five inches wide.

They can also carry a parasite, rat lungworm, that causes meningitis in humans and animals – for example, when people eat unwashed lettuce or other products that the carrier snail has slipped over and leaves a trail of mucus.

“DO NOT HANDLE SNAILS WITHOUT WEARING GLOVES!” warned the agriculture department.

Dealing with invasive species that are destructive, not just a nuisance, can be very expensive, noted Dr. Core on. Floridians spend an estimated $100 million a year fighting a single pest: the West Indian drywood termite.

On Wednesday, the state began treating the quarantine zone in Pasco County with a snail bait containing metaldehyde, a pesticide approved for use in vegetable and ornamental crops, fruit trees and other plants that disrupts and kills the digestive systems of the giant African land snails. †

Mellon, a rescue dog specially trained to detect giant African land snails, has “actively surveyed” the area, according to the Agriculture Department, which owns several vermin-sniffing dogs. (They sit when they smell a snail.)

Florida has exterminated the snails twice before: last year, after they appeared in Miami-Dade County in 2011, and in 1975, after their first discovery in the state in 1969. The Department of Agriculture announced in 2021 that a giant African land snail not found in Miami-Dade County since 2017, following an eradication attempt that collected more than 168,000 snails.

The snails identified in Pasco County look different from the snails previously seen in Miami-Dade County: Their flesh is creamy white rather than gray-brown.

The coloring leads state officials to suspect that the Pasco County snail population may have started with a pet snail released into the wild. The creamy white flesh “is the most desirable trait for the illegal pet trade,” said Christina Chitty, the director of public information for the agriculture division’s plant industry division. Giant African land snails are illegal to import into the United States without a permit.

Yet that is only a conjecture. “We probably won’t know how Pasco County’s population came to be,” said Dr. Core.