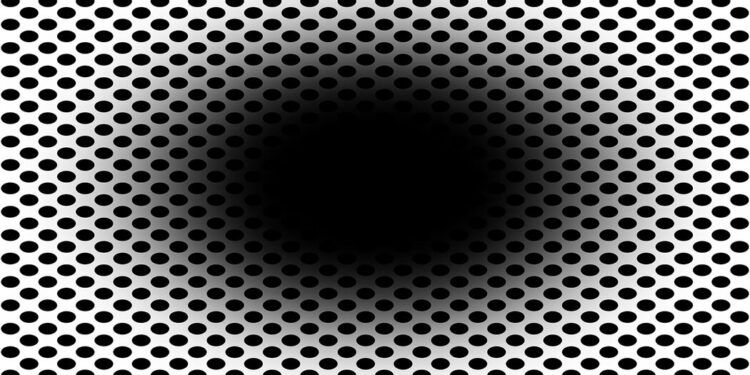 “Everything we perceive is not consistent with the physical reality of the world,” said Dr. purves. “Everything we see, be it line length, color, brightness, you name it.”

So you’re not really being fooled; instead, visual illusions help reveal what our mind’s eye is up to by showing mismatches between what we see and what is actually there.

One hypothesis, said Dr. Laeng, is that the brain tries to predict and show us the future.

It takes time for a stimulus, such as light, to reach our senses, which have to send it to the brain, which in turn has to process, understand, and do something with that information. And by the time our brains catch up to the present, time has already moved on and the world has changed.

To get around this, the brain can constantly try to predict a little bit into the future in order to perceive the present.

Seeing the expanding hole illusion isn’t a flaw, it’s a feature: It’s the result of your brain’s strategy to navigate an uncertain, ever-changing world, most likely built from evolutionary history to ultimately help humanity survive. It is adaptive to predict the future by, for example, dilating your pupils in anticipation of going somewhere in the dark.

So the world you see is an illusion, but don’t be alarmed.