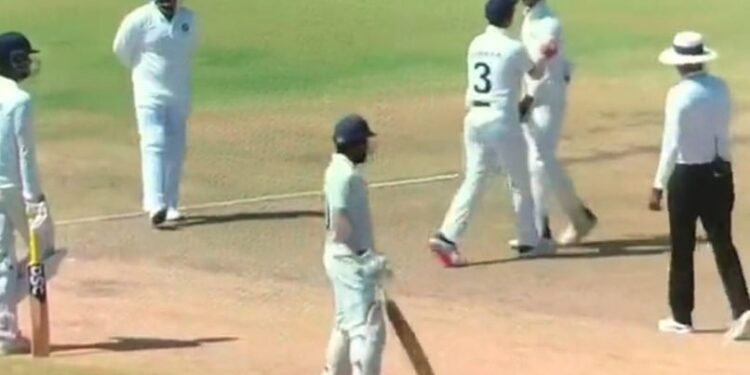 Rahane sent Jaiswal off the field due to disciplinary issues© Twitter

On the fifth and final day of the Duleep Trophy Final between West Zone and South Zone, a drama unfolded in the middle when West Zone captain Ajinkya Rahane ejected young lead-off hitter Yashasvi Jaiswal due to disciplinary issues. The entire episode unfolded as Jaiswal made regular visits to South Zone batter T Ravi Teja. Both players continued to compete, and eventually the umpires decided to talk to Rahane.

During the 50th left of the last innings, Jaiswal and Ravi Teja engaged in a verbal exchange. Rahane quickly attacked to pacify the situation. The experienced player had a conversation with Jaiswal.

But Jaiswal kept trying Teja, and then Rahane decided to send him away. Jaiswal was seen muttering something to himself as he walked away from the field.

Rahane has asked Jaiswal to leave the field after some discipline problems with the South Zone batter in the final of the Duleep Trophy. (Jaiswal was also warned earlier)pic.twitter.com/qftypyPyVv

Jaiswal eventually came back on the field on the 65th left of the innings. Previously, the left-handed batter had racked up 263 runs off 323 balls to score a 529-point goal for South Zone.

South Zone was eliminated for 234 runs in the fourth and final innings and the Rahane-led West Zone won the final by 294 runs.

After the match on the Jaiswal incident, Rahane said: “I believe in always respecting your opponents, umpires and match officials. So you have to handle certain incidents in a certain way.”