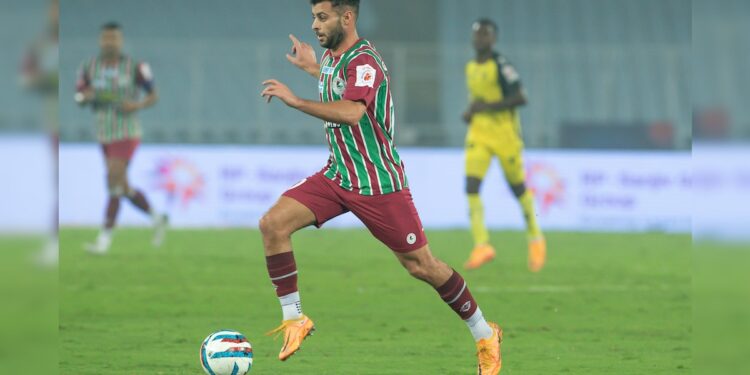 Hugo Boumous scored the only goal.©ISL

ATK Mohun Bagan rode on Hugo Boumous’ attack in the first half to beat defending champions Hyderabad FC 1-0 and return to winning ways in the Indian Super League at Salt Lake Stadium in Kolkata on Saturday. Grieving from a 0-3 reversal in Goa, the home side started on first foot in what turned out to be a spirited first half with Boumous finding the winning stroke in the 11th minute. Liston Colaco played Boumous through from the right side of central midfield after pulling in the Hyderabad FC defence. He was fouled, but the referee played an advantage, allowing Boumous to break through on goal.

As Hyderabad FC’s defense recovered, Boumous pulled them in before playing through Ashique Kuruniyan on the left. The winger charged forward before whipping across the goal to find Boumous at the far post, who completed his task.

This was the second straight loss for the Nizams as they were ousted from first place in the ISL standings, while the Mariners rose to fourth place in the standings.

In the 41st minute, ATKMB took a serious blow when their striker Manvir Singh was injured by a full-blooded gritty tackle from Hitesh.

Hyderabad FC’s first shot on target came in the 73rd minute, when Bartholomew Ogbeche was struck from a free kick just outside the box.

The striker’s right-footed shot was hit with power, but Vishal Kaith managed to get behind the ball and knock it away from his left.

Hyderabad FC will travel to Chennai on December 3rd for their next match while ATK Mohun Bagan will play against Bengaluru FC on the same day.