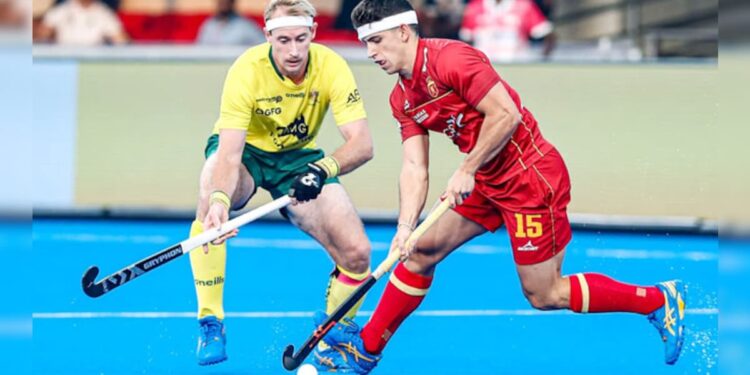 
Jeremy Hayward struck twice from the penalty corner as title favorites Australia secured a narrow 4-3 victory over Spain to enter their 12th consecutive FIH Men’s Hockey World Cup semi-finals on Tuesday. Australia, winner of the 1986, 2010 and 2014 editions, has reached the semi-finals of the World Cup 11 times since the 1978 tournament in Buenos Aires. Spain captain Marc Miralles made a costly mistake in their quarter-final, when he failed to score from the penalty four minutes after the final horn, as his team were 3-4 down in training.

Had he scored, the game would have gone to the shootout.

In the semi-finals on Friday, Australia will face the winner of Wednesday’s quarter-final between the Netherlands and South Korea.

In the last edition here in 2018, Australia lost to the Netherlands in the semi-finals in a penalty shootout.

Spain prevented Australia from playing their quick one-touch play in the first quarter and held on to their own game. Australia were the most dominant side, however, as they conceded three penalty corners in the first 15 minutes, but failed to convert once.

Penalty corner specialist Blake Grover took two without any success, while Jeremy Hayward tapped once for the same result as the two sides were tied goalless at the end of the first quarter.

But Spain caused a surprise in the second quarter by scoring two goals to one by Australia. At some point, thoughts of an upset victory might have crossed the minds of the general public at Kalinga Stadium. The European side led 2-0 until the last minute of the second quarter.

Spain scored two fine field goals through Xavier Gispert and Marc Recasens to take a 2-0 lead in the 24th minute. But with just seconds left in the second quarter, Australia pulled one back after Flynn Ogilvie found himself unchallenged in Spain’s striking circle through a pass from Matt Dawson.

Ogilvie hit hard and beat the goalkeeper to relieve the pressure on them.

If Spain were the better side in the second quarter, Australia were clearly the dominant team in the third as they scored three of the four goals scored in that period.

There was a burst of three goals in the space of five minutes for Australia as Aran Zalewski found goal in the second minute of the third quarter before Jeremy Hayward struck twice, in the 33rd and 37th minutes. From trailing 0–2 just before the end of the second quarter, Australia led 4–2 in the third.

Spain pulled one back four minutes before the end of the third quarter, with Marc Miralles scoring from a penalty corner.

The fourth quarter was a hectic game and Spain had a chance to score the equalizer and take the game to the shootout. But Miralles wasted the penalty stroke with Australian goalkeeper Andrew Charter, who was later named Player of the Match, and blocked the shot with his outstretched left leg.

Defending champions Belgium have progressed to the semi-finals of the ongoing FIH Men’s Hockey World Cup after beating New Zealand 2-0 in the second quarter-final at Kalinga Stadium in Bhubaneswar on Tuesday.

Belgium faced a formidable challenge from New Zealand. Van Aubel Florent scored a spectacular field goal in the 15th minute, while Tom Boon converted a penalty corner in the 10th.

Both goals came in the opening period. The Kiwis did their best to give the formidable Belgium a serious fight following their crossover victory over hosts India, but could only limit the number of goals scored against them to two. The Black Sticks hardly got any leeway from Belgium.

In the 48th minute, Kiwi captain Woods Nic received a yellow card. During the final stage of the game, only 10 players were left, putting even more pressure on them. They pushed hard to win in the fourth and final quarter, but the Red Lions’ defenders and guards proved too strong for them. With solid defense techniques, Belgium rolled into the semi-finals and got one step closer to defending their title crown.

“Root Cause is Dirty Politics”: Sports Activist Amid #MeToo Protests