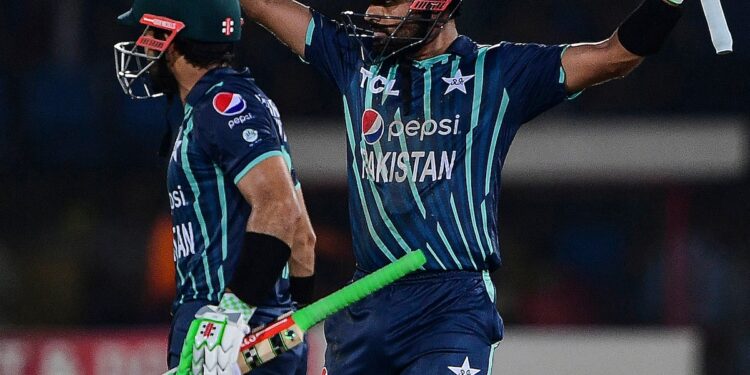 Babar Azam and Mohammad Rizwan celebrate after the victory.© AFP

Pakistan cricket team captain Babar Azam roared back into form on Thursday with a stylish hundred against England in the second T20I in Karachi. Babar, who had a subpar Asian Cup campaign, scored an unbeaten 110 from just 66 balls and was involved in a 203* run tie with co-opener Mohammad Rizwan (88*, 51 balls). It is the highest opening position when hunting T20s. The duo broke their own record of 197 runs (vs South Africa, 2021). For Babar, who hit five sixes and 11 fours in his at bats, this was his second T20I ton – the first from Pakistan to reach the milestone. Thanks to the stellar display, Pakistan chased down a 200-run target in 19.3 overs with 10 wickets left.

Previously, England stand-in skipper Moeen Ali hit a swift half-century to lead his team to 199-5 against Pakistan in the second T20 international in Karachi on Thursday. Moeen hit four sixes and as many fours in his 23-ball 55 not out after England chose to bat first after winning the toss at the National Stadium.

England, who are on their first tour of Pakistan in 17 years, won the first game by six wickets on Tuesday, also in Karachi, to take a 1-0 lead in the seven-game streak. After Pakistan’s victory, the series is now at level 1-1.