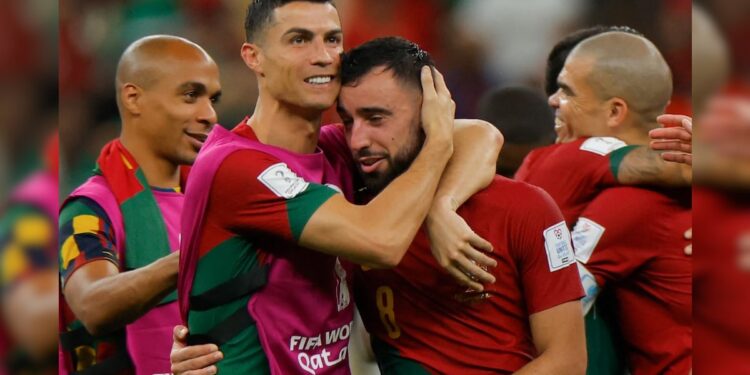 Bruno Fernandes scored twice to give Portugal a 2-0 victory over Uruguay on Monday and send them to the knockout stages of the World Cup along with France and Brazil. The Manchester United midfielder scored a cross nine minutes into the second half, then added an injury time penalty after a handball from Jose Maria Gimenez. The game at Doha’s spectacular 89,000-capacity Lusail Stadium also featured the first pitch invader of the Qatar tournament – the man wore messages of support for Ukraine and Iranian women and held a rainbow flag.

With Portugal already through, Uruguay must now beat Ghana in their final Group H match to have any chance of going through as well.

Both sides made three changes from their opening matches, with Portugal bringing in veteran Pepe for the injured Danilo Pereira, who suffered broken ribs in training.

Portugal dominated the first half, taking possession of the ball and creating several chances, but without ever putting Uruguay goalkeeper Sergio Rochet to the test.

Uruguay’s forwards, Edinson Cavani and Darwin Nunez had little possession, but the South Americans still had the best chance of the first period.

Rodrigo Bentancur picked up the ball in his own half and shot forward, slipping between two defenders and coming face to face with goalkeeper Diogo Costa, who spread well to save the midfielder’s shot.

Portugal’s captain Cristiano Ronaldo was largely anonymous in the first 45 minutes, but surprised the fans with a shoulder pass to single out William Carvalho, who volleyed over.

The big drama came after the break.

Moments after a field invader ran onto the field with an LGBTQ rainbow flag and a message in support of Ukraine and Iranian women on his T-shirt, only to be spectacularly tackled by security, Portugal moved forward.

Fernandes created space for himself on the left and curled a sweeping cross into the mixer, with Ronaldo breaking the offside trap to attempt a quick header.

As the ball lodged in goal, Ronaldo rolled away in celebration, but FIFA ruled he had not touched the ball, denying him a ninth World Cup goal, which would have put him level with Portuguese great Eusebio .

Uruguayan coach Diego Alonso brought in forwards Maxi Gomez and Luis Suarez as the South Americans began to apply some pressure late and both came close to equalising.

Gomez’s raspy drive from 20 yards came back off the post with Costa beaten, while Suarez hit the side net from close range.

With the 90 minutes almost over, Fernandes Gimenez made nutmeg, whose backhand guided the ball away from the midfielder and prevented him from going one-on-one with Rochet.

He then nearly completed a hat-trick, but hit the post from 20 yards out.