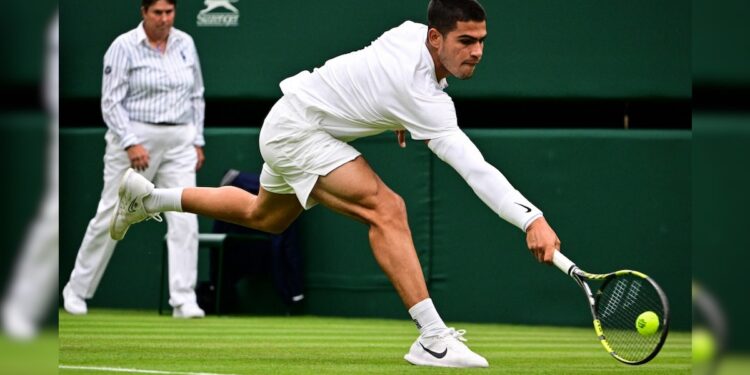 Carlos Alcaraz has been earmarked as a future Grand Slam champion, but on Monday night he had to pull out something special to reach the second round at Wimbledon. The Spanish teenage star came back from two sets to one, beating Germany’s Jan-Lennard Struff 4-6, 7-5, 4-6, 7-6 (7/3), 6-4. Alcaraz, the youngest man in the draw, fired off 30 aces and 73 winners in the thrilling five-set victory over his German opponent.

One recording in particular caught the attention of fans around the world. During the tiebreak of the fourth set, Alcaraz trailed 0-2. By the third point, Struff had him on the run, moving him from one end of the field to the other with powerful, precise shots.

However, Alcaraz, like his hero Rafael Nadal, never gave up. And when the German decided to use the slice, the 19-year-old turned on the afterburners to reach the ball first and then produce an astonishing cross-court pass, which Strauff just missed reaching the net.

The crowd came alive and the commentator tipped his hat to the Spanish youngster. Alcaraz himself gestured and burst into a huge grin as the crowd cheered him on.

“Last year I also played five sets here in the first round, so this shows how much I love grass,” Alcaraz joked after the game.

Alcaraz will now face Tallon groenpoor of the Netherlands in the second round on Wednesday.