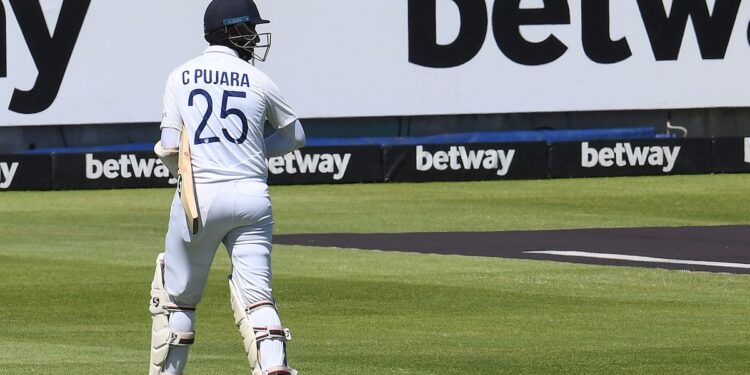 Cheteshwar Pujara registered an unwanted record in his name© AFP

Indian batter Cheteshwar Pujara set an unwelcome record on Day 3 of the decisive third and final test game against South Africa at the Newlands in Cape Town. Pujara was sacked before 9 on Thursday’s second ball when Marco Jansen cramped him for room. The India No.3 was given a gauntlet and Keegan Petersen, standing at leg slip, flew to the right to complete a stunning one-handed catch. With the resignation, Pujara became the batter most times to be fired without adding a run to his overnight score, according to Cricbuzz. This was the seventh time Pujara failed to add to his overnight count. The right-hander was previously level with former New Zealand all-rounder Chris Cairns and South African legend Jacques Kallis.

Pujara was under a lot of pressure to get into this test match. The veteran righthander, who had been out of runs for some time, was sent back for 43 runs in the first innings.

This was after Cheteshwar Pujara (9) and Ajinkya Rahane (1) were cheaply sacked in the first half hour.

The early setbacks didn’t stop Pant from playing his natural game, however, as he hit four boundaries and a six while adding 72 runs for the unbroken fifth wicket score with his skipper, who showed remarkable composure by playing second fiddle to Pant, who went for the jugular vein if and when the situation permits.

Pant, who had been flabby under pressure for his poor shot selection in the second Test, respected the good deliveries but was not shy about treating the bad with disdain. He was aggressive without being reckless, fearless without being careless.