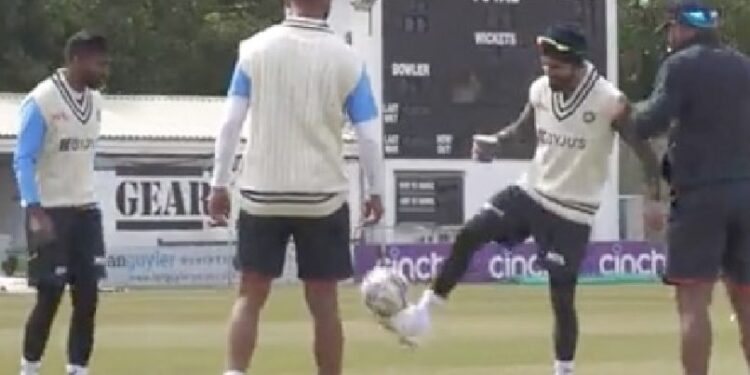 The Indian Test contingent has reached England and the squad has begun preparations for the rescheduled fifth Test against England, to be played in Birmingham from July 1. The contingent is currently in Leicester, preparing for a four-day first-class game against Leicestershire, which starts on Friday 24 June. On Monday, during a training session, Virat Kohli and Cheteshwar Pujara were among a few stars involved in a game of keepy-uppy.

Kohli, Pujara, Mohammed Shami, KS Bharat and Prasidh Krishna were involved in the game and the official Leicestershire Twitter handler posted a video.

Do one of these @BCCI superstars make up your ultimate 5-a-side soccer team? @imVkohli – Attacker? @cheteshwar1 – Central midfielder?@MdShami11 – Winger?

The first batch of the Indian test contingent had reached the UK last week and was undergoing their first training session. Rahul Dravid, Shreyas Iyer and Rishabh Pant left for the UK on Monday after the series against South Africa ended.

India are currently leading the five-match Test series 2-1 and the side would aim to win the rescheduled Test to win their first series in England since 2007, which happened to be led by Rahul Dravid.

The fifth test was moved after a string of positive COVID-19 cases in the Indian camp last year.