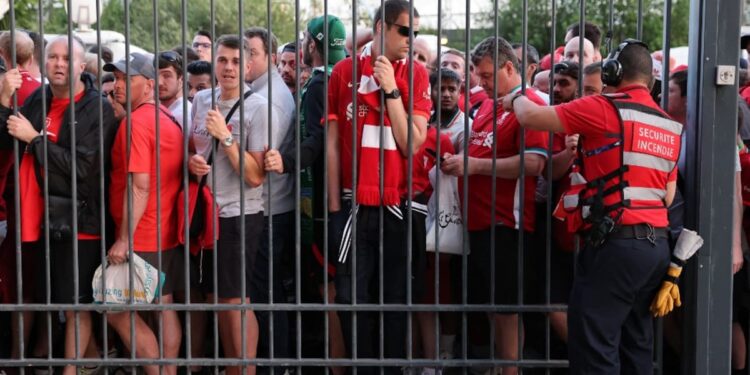 The Champions League final between Liverpool and Real Madrid in Paris started more than half an hour later than scheduled and was delayed due to “false tickets not working in the turnstiles,” UEFA said on Saturday. The match was scheduled to start at 9pm (1900 GMT) at the Stade de France, but was postponed due to the queues of fans unable to enter due to the fake tickets. “In the run-up to the match, the turnstiles on the Liverpool side were blocked by thousands of fans who bought fake tickets that did not work in the turnstiles,” UEFA said in a statement.

“This created a throng of fans trying to get in.

“As a result, the kick-off was postponed by 35 minutes to give as many fans as possible access with real tickets.

“While the numbers outside the stadium continued to grow after kick-off, the police dispersed them with tear gas and forced them out of the stadium.

“UEFA understands those affected by these events and will urgently look into these matters further with the French police and authorities, as well as with the French Football Association.”

Police sources told AFP supporters were trying to force their way through the first ticket checkpoint outside the stadium – located in the northern Paris suburb of Saint-Denis.

Tear gas was fired by police after several dozen people tried to climb over barriers, according to an AFP journalist on the scene with about 20 who succeeded and fell into the ground.

With half an hour to go before kick-off, thousands of supporters were still outside the stadium.

Football Supporters Europe, a lobby group representing fans across the continent, hit back at the security arrangements.

“Fans at the Champions League final bear no responsibility for tonight’s fiasco,” it tweeted before the match finally got underway.

“Thousands are still trapped outside the stadium, remaining calm in a completely unreasonable situation.

“We urge the relevant authorities to ensure the safety of all fans.”

“No way in, no way of knowing which way to go. Stay safe when you go in,” Cates wrote on her Twitter account.

At the time the match was due to start, there were still large areas of empty seats on the official Liverpool side of the 80,000-seat stadium.

Some 6,800 security forces were deployed for the event, with between 30,000 and 40,000 Liverpool fans without tickets to the final expected in Paris.

A fan zone with a capacity of more than 40,000 has been set up for them on an avenue in the east of the French capital.

About 20,000 fans from each club were officially given tickets to the match.