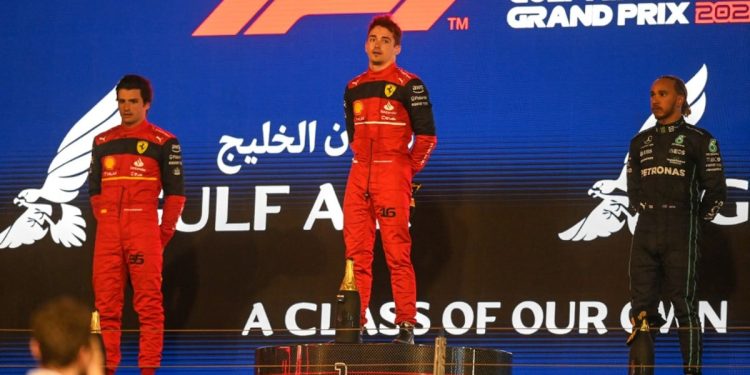 Ferrari’s Charles Leclerc won a dramatic Formula 1 season opening of the Bahrain Grand Prix on Sunday after reigning champion Max Verstappen was forced out with an electrical problem two laps before the end.

Carlos Sainz made it a Ferrari one-two, while Lewis Hamilton took third for Mercedes after Sergio Perez magnified Red Bull’s disastrous day by spinning out of the race on the final lap.

George Russell, in his first race since replacing Valtteri Bottas at Mercedes, took fourth to give Mercedes a score of 27 points they could not have dreamed of mid-race.

There was also a notable result for the Haas team, which failed to score points last season, only to see Kevin Magnussen, who has replaced Russian driver Nikita Mazepin following the invasion of Ukraine, finish fifth in his first race since 2020.

For Leclerc, who started the race on pole and battled for the lead in the early laps with Verstappen, it was pure enjoyment.

The man from Monaco told his team over the radio: “That’s exactly how we should start the season. One-two baby, one-two. Mamma mia.”

Once he had the race trophy in his hands, Leclerc said: “I’m so happy. We knew this was a great opportunity for the team and the guys did a fantastic job building a great car.

“A one-two today with Carlos – we couldn’t have hoped for better. It’s incredible to be back at the top.”

Leclerc had started on pole and in a furious early part of the race he swapped the lead several times with Verstappen under the Gulf spotlight.

On lap 37 of 57, Leclerc’s lead was 2.3 seconds and Verstappen argued with his own team over their instructions from the pit lane.

The race was disrupted when the safety car came out on lap 51 after Pierre Gasly had to jump out of his Alpha Tauri before it caught fire.

When racing resumed Sainz Verstappen attacked for second, but the Dutchman’s race ended in bitter disappointment as he seemed to lose all power on lap 55 and stumbled into the pits without a point.

While Christian Horner and his Red Bull team were coming to terms with the champion’s failure, Perez suddenly turned and came to a stop, apparently due to a mechanical problem.

As a result, seven-time champion Hamilton was able to help himself to third place.

“It was such a difficult race – we struggled all through practice and this was the best result we could hope for. We are grateful for these points,” said Hamilton.