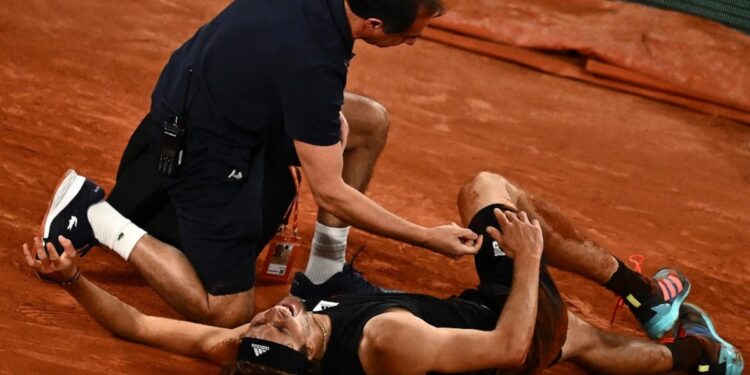 Alexander Zverev said he suffered a “very serious injury” when he damaged his ankle and had to withdraw from his French Open semifinal against Rafael Nadal on Friday. “It looks like a very serious injury, but the medical team is still monitoring it and I will keep you informed,” the world number three in Germany said in a video message from Roland Garros.

Nadal led 7-6 (10/8), 6-6 when Zverev injured his right ankle and had to be removed from the field in a wheelchair before withdrawing from the game.

“It was a very difficult moment on the pitch. It looks like a very serious injury, but the medical team is still monitoring it and I will keep you informed,” Zverev said.

“But congratulations Rafa, it’s a great achievement to be in the final for the 14th time.

“I hope he goes all out and makes more history.”

Until the dramatic end of the match, Zverev had been pushing Nadal all the time.

In a rollercoaster the 91-minute first set, Zverev broke in the opening game before Nadal made it to 4-4.

The Spaniard, dripping with sweat under the closed roof, saw three set points come and go in the 10th game, as the German’s all-or-nothing hit kept him in the game.

Nadal, who celebrated his 36th birthday on Friday, then saved four set points in a razor-sharp tiebreak, one of which was on a spectacular running crosscourt forehand.

A blistering forehand pass gave him the opener at a sixth set point.

Zverev, who played in the semifinals at Roland Garros for the second consecutive year, made 25 winners and 26 unforced errors.

The second set was interrupted by eight service breaks. When Nadal broke for 2-1, he did it after an exhausting 44-shot rally.

Nadal becomes the second oldest man to reach the final in Paris, after 37-year-old Bill Tilden who finished second in 1930.

With the win, Nadal, who defeated world number one and defending champion Novak Djokovic in the quarter-finals, took his record at the French Open to 111 wins and just three losses.

If he wins on Sunday, he would be the tournament’s oldest champion, overshadowing 34-year-old compatriot Andres Gimeno who took the title in 1972.