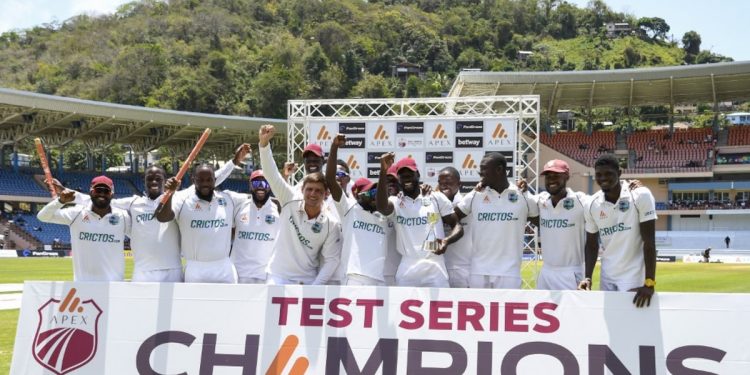 The West India men’s cricket team defeated England by 10 wickets in the final Test match played at the National Cricket Stadium, St George’s in Grenada, to win the three-match series 1-0. The emphatic win also helped West Indies move up a place in the updated ICC World Test Championship points table to be ranked seventh. On the other hand, England suffered another defeat in the series as they now take bottom place with just one win in 13 Tests played in this WTC cycle so far. The West Indies are currently seventh with two wins in seven Tests played.

After drawing the first two tests, both teams entered the third with a view to a series win.

However, it was the hosts who dealt the first big hit by limiting England to 204 in the first innings.

It could have been worse had it not been for Jack Leach and Saqib Mahmood, who added 90 runs before the last wicket to move England to a respectable position.

But a second big strike in the second innings resulted in England’s defeat when Kyle Mayers took an impressive five wicket away.

Australia remain at the top of the table after their 1-0 series win in Pakistan, followed by South Africa and then India. With three wins, Pakistan is in fourth place, while Sri Lanka and New Zealand are in fifth and sixth place respectively.