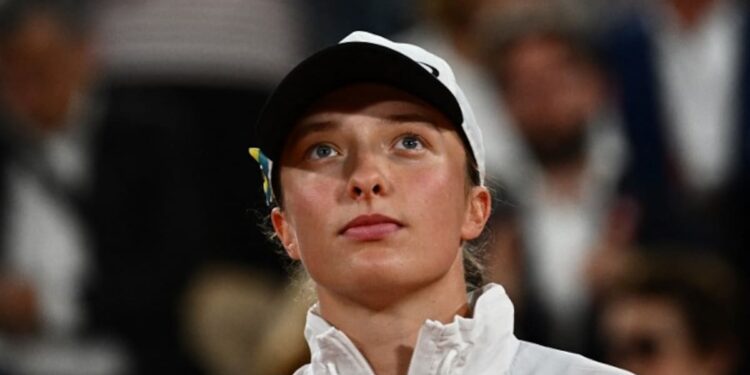 Iga Swiatek received a standing ovation at Roland Garros on Saturday with an emotional “stay strong Ukraine” peace request after winning her second French Open title. The 21-year-old Pole spoke out after a 6-1, 6-3 win over Coco Gauff in just 68 minutes at Court Philippe Chatrier, tying Venus Williams’ record for longest winning run by a woman in the 21st century. “I wanted to say something to Ukraine, to stay strong, because the war is still there,” said Swiatek, who wore a ribbon in the colors of the Ukrainian flag on her cap throughout the tournament.

“Since I gave my speech in Doha (after winning the tournament in February), it had started and I hoped that the situation would be better when I gave the next tournament speech, but I still have hope.”

Moments later, she told broadcaster NBC: “The war is still there and people are suffering.”

“A lot of players have taken the (Ukraine) ribbons off and there is a huge discussion about next tournaments and points. It’s not about that, but the whole situation there and I want people to be aware.”

Swiatek consoled 18-year-old Gauff, the youngest woman in a Slam final since Maria Sharapova at Wimbledon in 2004.

The American sobbed as she sat next to the field at the end of the final and again on the trophy podium.

“First, I want to congratulate Coco, because you are doing a great job. You are constantly making progress. You will find it and you will be there, I am pretty sure,” said the Pole.

“When I was your age, I was on tour in my first year and I didn’t know what I was doing.

“I want to thank my team guys, I mean oh my god I wouldn’t be here without you I’m sure. I’m glad every piece came together and we can do this. We deserve to be here Thank you for your full support all the time, no matter what.”

Gauff hoped to return to more Slam finals in the future.

“This is my first time so I will try to get through this,” she said on stage.

“Congratulations Iga, what you’ve done over the past few months has been amazing. Hopefully we can play a lot of finals and I can win on you one of these days.

“Thank you to you in the crowd who supported me even when I was down. Even when I missed match points you cheered me on and that means a lot, so thank you really.”