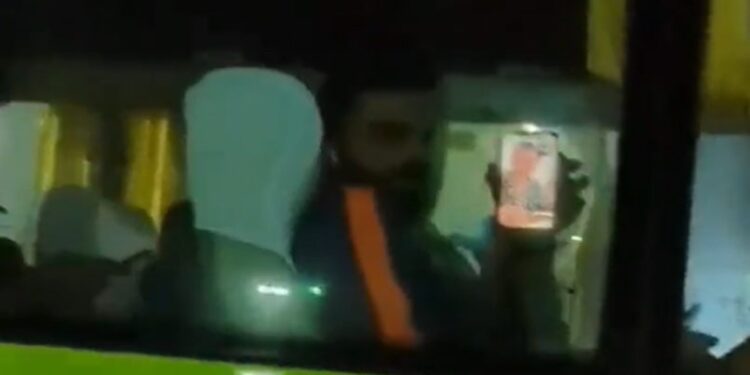 Team India recorded a memorable 8 wicket victory against South Africa in the 1st T20I at the Greenfield International Stadium, Thiruvananthapuram on Wednesday. With this win, the Rohit Sharma-led side has taken a 1-0 lead in the three-match T20I series. First to bat, South Africa was limited to 106/8, thanks to the three-wicket and two-wicket haul of Arshdeep Singh and Deepak Chahar respectively. In the chase, KL Rahul (51*) and Suryakumar Yadav (50*) crushed half a century as Team India chased the goal in 16.4 overs and eight wickets in their hands.

After the game, fans witnessed a very heartfelt moment that left everyone in awe. As the Team India bus left the stadium, it encountered a huge crowd cheering for the team. It was then that star batter Virat Kohli, who was on a video call with his wife Anushka Sharma, turned the screen of his phone to the audience and glimpsed the fans’ support for Anushka.

@imVkohli In video call with @AnushkaSharma As you return from the match and show it to fans #Virushka #INDvSA pic.twitter.com/YRVLNwZCiq

This move by Kohli left the fans overjoyed as they started jumping and screaming with happiness.

Coming to the match, Kohli failed to put on a fiery performance and was fired by Anrich Nortje at 3, shortly after skipper Rohit Sharma’s resignation.

Rahul played the part of the anchor, while Suryakumar Yadav came in after the wickets of Rohit and Kohli and put pressure back on the South African bowlers, crushing an unbeaten 50 from 33 deliveries.