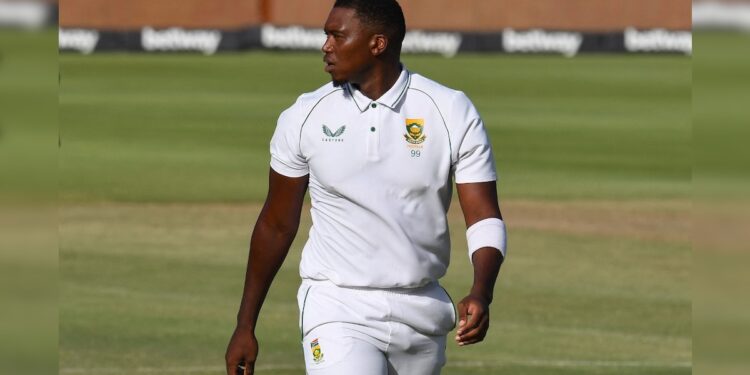 South African pacesetter Lungi Ngidi said on Thursday the Indians were clearly “frustrated and under pressure” when a controversial DRS call rescued home skipper Dean Elgar, sparking angry reactions from the visiting camp on day three. Elgar was caught for the stumps by spinner R Ashwin and umpire Marais Erasmus raised his finger. But the decision was reversed with the ball tracker suggesting the ball might have gone over the stumps. There was drama and constant chatter by Captain Virat Kohli, his deputy KL Rahul and ace off-spinner Ravichandran Ashwin, who appeared to suggest that broadcaster Supersport TV had manipulated DRS on the stump microphone.

“Reactions like that show a bit of frustration. And sometimes teams respond to that. You never want to show too much emotion, but I think we could clearly see there that the emotions were high,” Ngidi said during the media interaction after the end of the procedure on the third day.

An enraged Kohli showed his anger at the end of the over, went to the stumps and said: “Focus on your team too when they let the ball shine, not just the opponent. I always try to catch people.”

Ashwin was also caught saying: “You should find better ways to win Supersport”, while India’s vice-captain said: “The whole country is playing XI guys.” Ngidi said it was clear that the Indian camp was upset.

“That probably tells us that they might feel a little bit pressured. That was a good partnership for us as well. So they really wanted to break that partnership.

“Those feelings ended up there. But in the end I think everyone reacts differently to certain situations and probably to what we saw there, probably how those guys were feeling at the time.” said Ngidi.

We rely on DRS

He supported the DRS system and went on to say, “Yes (we rely on DRS).” “I mean, we’ve seen it used on countless occasions around the world. It’s a system that’s in place and used in cricket,” he added.

Elgar and Keegan Petersen (48 at bats) chased 212 and set a crucial 88-run score for the second wicket before the skipper got out to Jasprit Bumrah on day three with a stump battle.

“I think everyone is still in the game to be honest. If we had a 60-run partnership tomorrow morning it would put us in a good position.

“But when they take a wicket, the balance shifts to them. So I think it’s perfectly balanced at the moment. Tomorrow’s morning session is going to be very important.”

“We all know that hitting in South Africa is not easy. It will be difficult, but I think the team that does the best will come out the best,” he added.

Speaking of the pitch, he said: “I think the ball does something in the whole Test series. There are places on the wicket where when you hit it, it does something more than others.”

“But all in all I think with patience we can see guys can score a hundred. There have been two 70s already.

“With the right application there are runs to the wicket. But that doesn’t mean that as a bowler you get wicket if you hit the right areas. So it’s a good cricket wicket. Everyone participates. My opinion.”

We are not a team of superstars

Earlier, Indian dropped from 152/4 to 198, losing six wickets in 46 runs. It was Ngidi, who caused the collapse by grabbing Virat Kohli’s prized scalp who stepped out after a dogged 143-ball 29.

“We don’t go out with a team full of superstars, we have good cricketers, good cricket brains. It’s always a team effort,” said Ngidi, returning with figures of 3/21 from his 14 overs.

“From the first test match that’s the kind of language we spoke in the dressing room, there will be times when someone has to raise their hand.

“If someone isn’t taking wickets, you have to keep the runs low. And when it’s your day, make sure you cash in on that session. For me it was my session and you run with it as long as you can. Other days it was the KG keeping it down. So it was quite an effort,” he concluded.