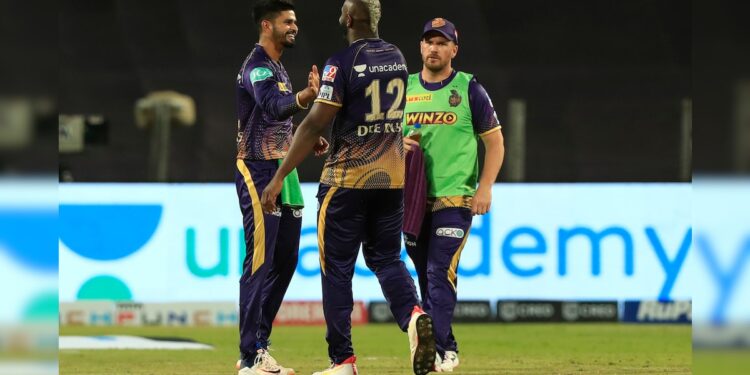 Kolkata Knight Riders put on an all-round performance beating SunRisers Hyderabad by 54 runs on Saturday at the Maharashtra Cricket Association Stadium in Pune in the 61st match of the ongoing Indian Premier League (IPL) 2022 season. Andre Russell played with both the bat and ball and as a result, he was adjudged Player of the Match. He first played an undefeated knock of 49 to help KKR post 177/6 in 20 overs. He then went on to take three wickets to limit SRH to 123/8, helping KKR win the match by 54 runs. As a result of this win, KKR’s hopes of making it to the playoffs are still alive.

With the win over SunRisers Hyderabad, Kolkata Knight Riders moved up to sixth in the points table with 12 points, while SRH is in eighth place with 10 points.

So far, Gujarat Titans are the only team to cement their place in the playoffs, leading the table with 18 points from 12 games. Lucknow Super Giants are second in the standings, followed by Rajasthan Royals, who have played 14 out of 12 games. RCB is fourth with 14 points from 13 games.

Delhi Capitals also has 12 points and is currently fifth in the table while Punjab Kings is in seventh position.

Chennai Super Kings and Mumbai Indians are in the bottom two places, with eight and six points respectively.

Rajasthan Royals opener Jos Buttler is currently the holder of the Orange Cap with 625 runs. Lucknow Super Giants skipper KL Rahul is in second with 459. David Warner of Delhi Capitals is in third with 427 runs, while Shikhar Dhawan is in fourth with 402. RCB skipper Faf du Plessis is in fifth with 399 runs.

RCB spinner Wanindu Hasaranga tops the charts in the Purple Cap race. He has 23 wickets so far this season, the same as second seeded Rajasthan Royals spinner Yuzvendra Chahal.

Kagiso Rabada follows the two wrist spinners in third place as he has 21 wickets to his name. Harshal Patel and Kuldeep are in fourth and fifth place, respectively.