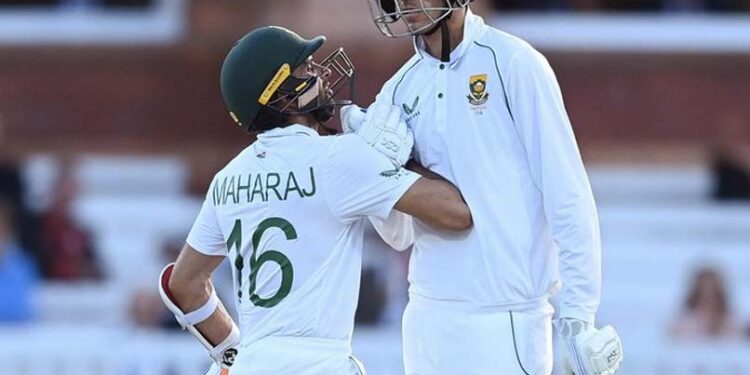 Marco Jansen and Keshav Maharaj took South Africa ahead of England in the first innings by more than a hundred runs in the first Test at Lord’s on Thursday after a fine fifty by Sarel Erwee. England captain Ben Stokes had his side thrown back into the game as he removed well-placed opener Erwee (73) and Rassie van der Dussen (19) in quick succession to leave the Proteas 192-5. But come stumps on the second day, South Africa were 289-7 – 124 runs ahead.

Jansen was 41 not out, having added 72 for with Maharaj (41) as the seventh-wicket duo cashed in on England’s failure to bowl to increasingly unorthodox fields.

Ollie Pope’s 73 was the only double score from an England specialist batsman, with all-rounder Stokes’ 20 being the second best contributor.

Thursday’s mostly sunny conditions no doubt made hitting easier than it had been on Wednesday’s first rainy first day.

Elgar’s bizarre exit – But South African captain Dean Elgar and fellow lefthander Erwee still showed plenty of application, while also scoring solidly against an England attack that lacked both the pace and accuracy of the Proteas’ four quicks .

Elgar, who was dropped by Zak Crawley in the briefs at seven, was then largely unconcerned until, after making 47, he fell in a bizarre fashion when a ball from 40-year-old England great James Anderson bounced off his thigh protector and forearm. before he hit the stumps.

The 32-year-old Erwee only reached his second fifty in his brief Test career when he beat Stuart Broad through the cover for a sixth four in 89 faced balls.

Aiden Markram hit three stylish fours in his 16 before being caught behind Jack Leach – the first spinner used by both sides this match.

He sent the resolute Erwee away as an excellent bouncer from around the wicket raised a good length to grab the gauntlet before luffing gently to wicketkeeper Ben Foakes.

Stokes, struggling with a long-standing knee problem, then had Van der Dussen shoot for 19 lbw with a ball that was jagged back.

However, Maharaj pulled Anderson down for four and Jansen hooked Stokes over the long leg for six. And by the time Maharaj holed for Stokes, he had hit seven fours in 49 balls.

England resumed on Thursday at 116-6, with Pope 61 not out before Rabada completed the innings, after causing an initial slump by cheaply removing openers Alex Lees and Crawley on Wednesday.

England have won all four of their Tests under a new leadership pair of Stokes and coach Brendon McCullum after adopting a policy of total attack.

But the approach proved inadequate against a quality attack that has helped South Africa climb to the top of the World Test Championship table.

Pope should have been out for 67 when he first issued Rabada, only for Erwee to cash in on a routine chance despite four juggling attempts to hold the ball.

However, Rabada had Pope chop a full-length ball to end a 102-ball inning, with England 134-7.

And he showed his game was more than sheer speed when he undone Broad (15) with a clever slower ball that spooned the tailender to Elgar at one point.

Rabada ended the innings with Anderson lbw for a duck.