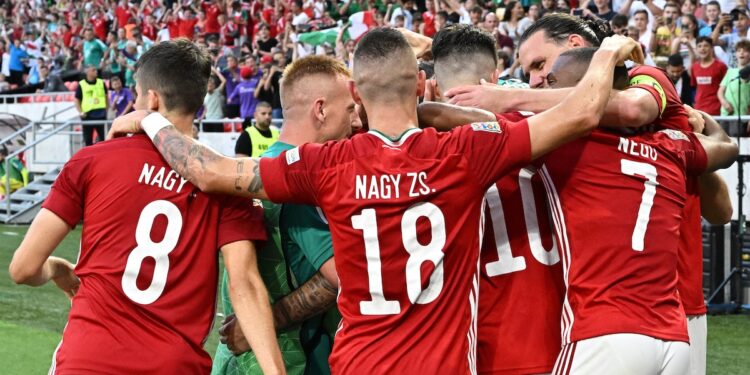 Dominik Szoboszlai scored the only goal from the penalty spot when Hungary defeated England.© AFP

England slumped to their first defeat to Hungary in 60 years on Saturday, as the hosts took a shocking 1-0 win in Budapest to launch their Nations League campaign. Dominik Szoboszlai scored the only goal from the penalty spot as Hungary celebrated their first win over England since 1962. Penalty defeat to Italy in the Euro 2020 final marked the only time Gareth Southgate’s side had been beaten in their previous 22 games. However, an experimental side failed to harass the hosts, who were cheered by a crowd of 30,000 mostly schoolchildren.

Hungary had to play the game behind closed doors due to the behavior of fans during their home games at Euro 2020.

UEFA guidelines allow children under 14 to receive free tickets under such circumstances and the Hungarian Football Association has taken full advantage of this.

Southgate handed senior debuts to Jarrod Bowen and James Justin, but the visitors never got going.

Hungary created the best of the chances, Szoboszlai saw a try from Conor Coady’s line and captain Adam Szalai’s ambitious attempt from just inside England’s half that fell just wide after seeing Jordan Pickford off his line.

The pressure from the home side paid off when they were awarded a penalty 64 minutes into the game as substitute Reece James fouled Zsolt Nagy after the Hungarian left-back controlled a pass into the area.

James was shown a yellow card when RB Leipzig striker Szoboszlai made no mistake from the spot to give the hosts the lead.

Harry Kane nearly saved a point in stoppage time but was inches from his 50th international goal when his powerful effort flew into the side net.

Southgate’s men must now gear up for a trip to Germany on Tuesday before receiving Italy and Hungary later this month.