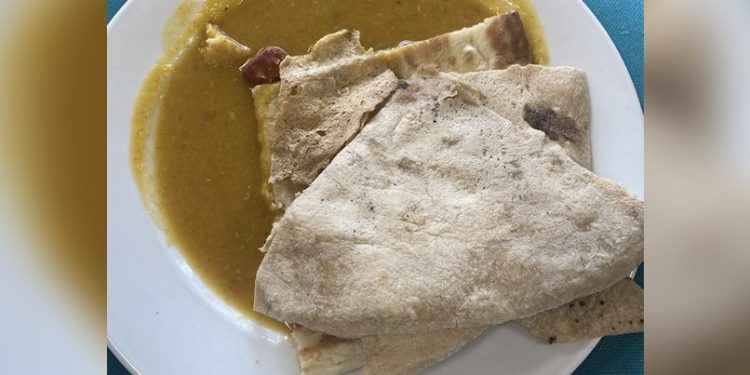 After an uneventful draw in the opening Test between Pakistan and Australia in Rawalpindi, the two teams resumed the rivalry in the second Test in Karachi which started today. Ahead of the Karachi Test, Australian batter Marnus Labuschagne shared a photo of him enjoying “daal en roti” for lunch on Friday. The Australian cricketer wrote that the meal was “delicious”, but Twitter was unimpressed. Many fans took to the social media platform to troll the Pakistan Cricket Board (PCB).

“Also Daal and roti for lunch. Delicious,” Marnus Labuschagne tweeted with a photo of his meal.

Daal and roti for lunch too. delicious pic.twitter.com/w5KgimFo1N

Twitter had none of it and many compared it to food given in prisons.

Pakistan Cricket Board (PCB) provides this kind of food to cricket players who come to play in Pakistan. Even my mother can cook more deliciously than the luxury hotels in Pakistan where cricketers stay. https://t.co/hDTykvUjfN

My husband Marnus is here to reaffirm that @TheRealPCB actually kept them all in jail. https://t.co/fGnCDviM7A

sorry but you have been trolled. You never serve half-cooked naan in a watery daal

this is how it should look pic.twitter.com/OsaYCivQSB

That’s the saddest dal and roti I’ve seen Marnie. Hope you get some good dal and roti later this year https://t.co/alN2xDizKh

Looks like food served in hospital. get well soon bro

They served you a lunch meal from Peshawar prison?

Pakistanis can’t even feed them properly…poor guys eating sukhi daal and rotis without veggies.. shame on you @TheRealPCB you don’t deserve to host cricket matches after such treatment of foreign players

Even a prisoner gets better quality meals than this in India and you are a guest in Pakistan.

Marnus after seeing this food :- pic.twitter.com/q090g4NUBs

This is not a drop. This is daal ka pani. Isme dubki laga kar daal dhundna padega. Also no tadka.
But, but, but… You get food in pakistan, that’s more than enough. Have fun!! https://t.co/VFdJy2V4r6

On Saturday, Australian captain Pat Cummins won the toss and chose to bat against Pakistan in the second Test in Karachi.

The visitors dropped fast bowler Josh Hazlewood from the first Test lineup and handed a debut to leg-spinner Mitchell Swepson to bolster their spin attack.

Swepson, 28, is the first specialist leg spinner to play a Test for Australia since Bryce McGain against South Africa in 2009.

Pakistan brought back frontline paceman Hasan Ali and all-rounder Faheem Ashraf – who both missed the first Test due to injuries – to replace Iftikhar Ahmed and Naseem Shah.

Australia is on their first tour of Pakistan since 1998, having previously refused to visit for security reasons.

The third and final test will be in Lahore from March 21-25.