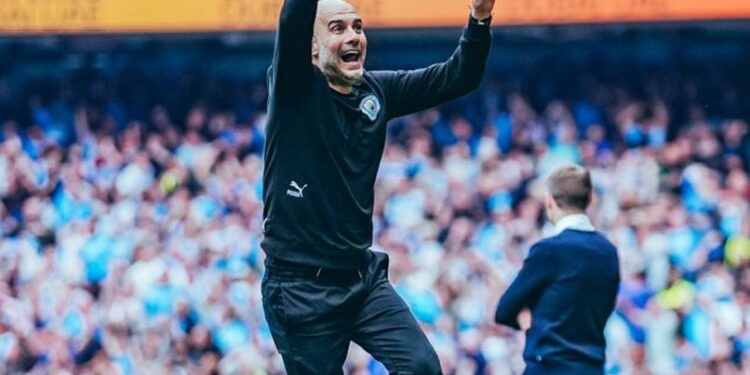 Pep Guardiola may not yet have delivered the Champions League crown that Manchester City crave, but four Premier League titles in five years show a period of dominance to rival his time at Barcelona and Bayern Munich. The Catalan now has 10 league titles to his name in just 13 seasons as a senior coach in three of the toughest divisions in the world. Few have been as hard-fought as City’s latest title win. Guardiola’s men were pushed to their limits by a Liverpool side he described as the best he has seen in his managerial career.

The Reds can still achieve a League Cup, FA Cup and Champions League treble if they beat Real Madrid in Paris on May 28.

But as in the riveting title battle between the same two clubs three years ago, City came home with a point thanks to a dramatic 2-0 kickback to Aston Villa 3-2 on the final day.

Recognition of Guardiola’s achievements at City has often been accompanied by the caveat of the vast resources at his disposal and the consequent failure to turn domestic dominance into European success since he left Barcelona ten years ago.

“If we don’t win it in my last stint here I will be a failure,” Guardiola said last month, speaking of his Champions League record.

But his ability to build sides capable of meeting the brutal demands of winning a 38-game title is unmatched.

The 51-year-old has laughed at suggestions he could match the longevity of former Manchester United boss Alex Ferguson.

But only Ferguson’s pick of 13 Premier League titles in 27 years at Old Trafford comes close to Guardiola’s strike rate in Europe’s toughest competitions.

“Pep is the best coach in the world,” Liverpool manager Jurgen Klopp said last month. “I think we can all agree on that and it could be a coincidence that it hasn’t worked out in the Champions League so far.

“If anyone doubts him, I have no idea how that could have happened.”

City’s long-term strategy to build the club’s infrastructure around Guardiola, even before his arrival, is thoroughly justified.

Football director Txiki Begiristain and CEO Ferran Soriano were plucked from Barcelona with the aim of enticing Guardiola to England.

Guardiola had been burned out by the demands of the job at Barcelona after four seasons and cut his time at Bayern after three years.

In contrast, he has now stayed with City for six seasons and will be there for at least a seventh.

Backed by Abu Dhabi’s state wealth, Guardiola has been given the money to put together one of the most expensive rosters in football history.

However, there are limits to that purchasing power, City discovered last year.

Tottenham would not let Harry Kane go, despite City’s interest and the England captain’s desire to leave.

The English champions have already rushed forward to meet their need for a striker for next season by beating competition from other leading clubs in Europe and signing Erling Haaland.

But Guardiola had to go without a natural finisher this season and still turned the top-scoring team in the Premier League upside down.

Most importantly, he also held on to the trophy which he values ​​more than any other.

“There are many weeks and games, struggle with injuries, good and bad moments with different situations, difficult opponents.

“It’s satisfying because it’s every day. When you fight for the Premier League and have success in the end, you feel that you enjoy a lot. We are happier in our lives when you win.”

The fear for the rest of the Premier League is that City will likely become even stronger with the arrival of Haaland.

Guardiola has a fourth in England after three league titles at Barca and Bayern and his grip on the Premier League is only getting tighter.