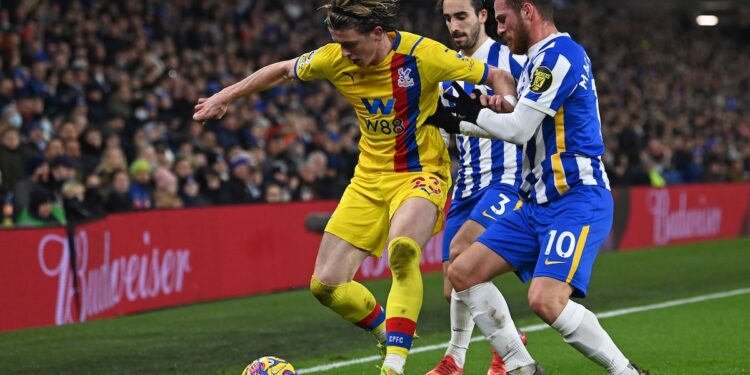 Brighton overcame the disappointment of a missed penalty and a disallowed goal to take a point in a 1-1 home draw against Crystal Palace on Friday thanks to a late own goal from Joachim Andersen. The Seagulls look destined for an unfortunate defeat after Conor Gallagher’s seventh goal of the season gave Palace a 69-minute lead by the end of the game. But Brighton saved a draw three minutes from time when defender Anderson accidentally diverted the ball into his own net.

“Especially the first half was so dominant, should have led the way and maybe take that out of the game.”

He added: “The guys played with real intensity and real personality.”

“The first half was all about them, but in the second half we came back with more determination and more discipline and I think we managed to frustrate them,” said Vieira.

“Of course it’s frustrating when you score first and then give in with five minutes to go, but I think they deserved that goal,” added the former Arsenal and France midfielder.

Brighton were twice denied an opening goal in a remarkable first half when they missed a penalty and a goal was disallowed.

Pascal Gross’s weak effort from the spot in the 38th minute was saved by Palace goalkeeper Jack Butland after Joel Veltman was ticketed by Will Hughes in a corner following a VAR intervention.

Just before the penalty, a flare was thrown onto the pitch by the Palace supporters and the traveling fans were still enjoying Butland’s save when Brighton’s Neal Maupay fired the ball into the net moments later.

But referee Robert Jones was again called to the monitor on the pitch and, after examining the replay, ruled that Maupay had bundled the ball out of Butland’s hands and had disallowed the goal.

Former England No 1 Butland made several good stops to keep Patrick Vieira’s side in the game.

In addition to his first penalty save in England’s top division, Butland also denied Leandro Trossard and Jakub Moder, with the latter also hitting the bar.