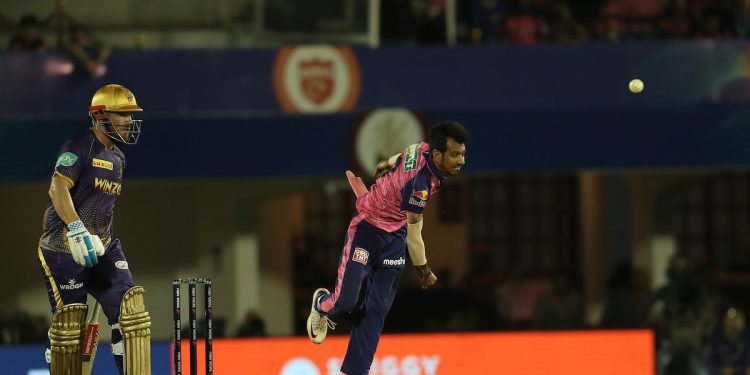 Rajasthan Royals bowling coach Lasith Malinga said Yuzvendra Chahal showed why leg spinners are considered match winners in the Indian Premier League (IPL) with a brilliant 17th over to score the first hat-trick of the season. Chahal (5/40 in 4 overs) removed Venkatesh Iyer from his first pitch in the 17th over and then Shreyas Iyer, Shivam Mavi and Pat Cummins from the fourth, fifth and sixth ball to turn the game completely upside down RR a close seven-run win over Kolkata Knight Riders on Monday night.

This was after Jos Buttler’s 61-ball 103, his second ton of the season, helped Royals score an imposing 217 for five.

“Chahal has more international experience. He is the most experienced leg spinner in the country and in this tournament. He has shown how to control the skill. That is more important for him to prove that he is good enough to to play any competitive cricket.” Malinga said at the post-match press conference.

“Leg spinners have more wicket-taking opportunities and he showed today how to get wickets and turn the game into a single over. I think he’s shown all leg spinners that they are the match winning bowlers in this competition.”

KKR head coach Brendon McCullum said it was a good game of cricket but Chahal and Buttler simply took the match away from his side.

“You can’t let good players like Chahal come into play when there’s pressure. We played a good game but just made some stupid mistakes.

“But that happens sometimes. Jos Buttler got a hundred on their side, Yuzi Chahal got a five-for including a hat-trick and we lost by seven runs, so we played a good game but came in second,” said McCullum.

“With four overs to go we were in the driver’s seat but then some stupid mistakes and unable to handle the pressure as well as we should have cost the game.”

With six points from seven games, KKR is currently sixth in the points table and the Kiwi said they should stick together as a unit and keep pushing each other.

“From our point of view, we’ve had three losses in a row and we’re going to have to find a way to keep our morale high, which is so important. There can be a tendency to run away from things if you don’t in some important games. have crossed the line.

“We just have to keep pushing ourselves, make sure we stick together and stay calm. We’ve been there before and it’s going to test us again this time,” McCullum said.