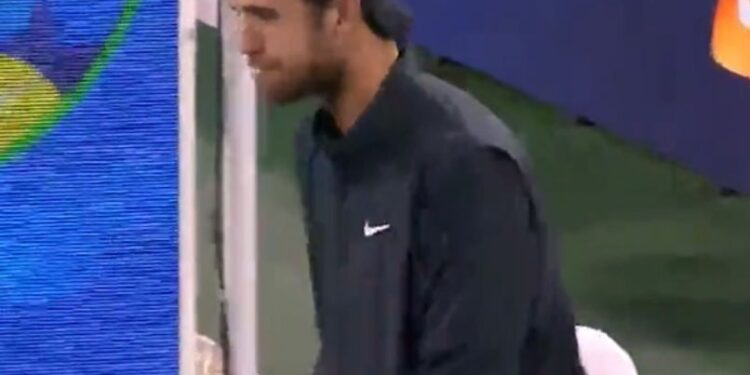 The duo of Karen Khachanov and Denis Shapovalov defeated Rohan Bopanna and Matwe Middelkoop on Monday 7-6 (8/6), 6-7 (12/14), 10-6 in the first round of the men’s doubles at the 2022 Cincinnati Masters. Rain had interrupted the game, but the players and the crowd enjoyed the interruption. All four Khachanov, Shapovalov, Middelkoop and Bopanna left no stone unturned to entertain the fans on the field. It all started with Khachanov showing his dance moves to the spectators as the music was played during the delay.

While Khachanov’s partner Shapovalov was spotted smiling in his seat, Middelkoop and Bopanna also started dancing from the other side to add more fun for the audience. Later, Shapovalov also raised his hand to give the spectators more support.

Do you need entertainment with rain delay?

After the game, Shapovalov thanked the fans for coming to his game. “Seriously thank you to all the fans who stayed up late and through the delays!!” the Canadian tennis player wrote in an Instagram story. “Your energy was all match (lit emoji).”

Khachanov and Shapovalov then face Jamie Murray and Bruno Soares in the round of 16.

Murray and Soares advanced with a 4-6, 6-2, 10-7 win over eighth seed Juan Sebastian Cabal and Robert Farah. The pair will try to keep up the momentum when facing the duo Khachanov and Shapovalov.

Among other matches, the duo of Thanasi Kokkinakis and Nick Kyrgios kicked off their Cincinnati Masters campaign with a straight win over Simone Bolelli and Fabio Fognini on Monday. The Australian duo won the match 6-0, 6-4 in 60 minutes. They then take on top seeds Rajeev Ram and Joe Salisbury in a second round.

On the other side in singles, Cameron Norrie survived a big scare from Dane Holger Rune and reached the second round in Cincinnati on Monday. In a hard-fought showdown, the Brit showed a mixture of grit and quality as he washed away Rune’s powerful foundations, breaking the 19-year-old’s defense with his aggressive shots to win 7-6(5), 4-6, 6-4 after two hours and 34 minutes in Cincinnati.