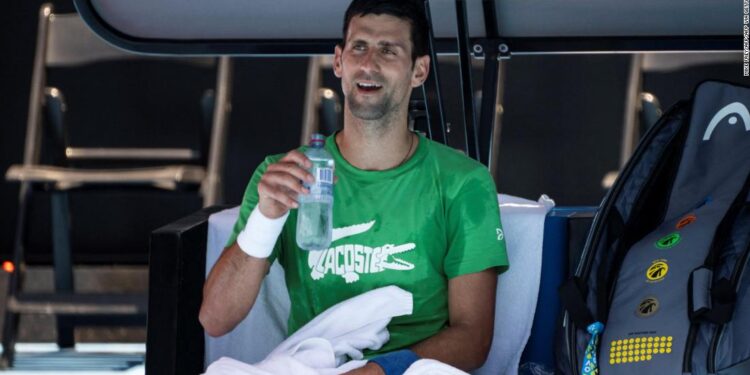 Djokovic, who is looking to win his 10th Australian Open title in Melbourne this month, is waiting for Australian immigration minister Alex Hawke to decide whether to revoke his reinstated visa ahead of the tournament.

Djokovic, 34, had his visa revoked after entering Australia without a valid exemption from the country’s vaccination requirements, but a judge ruled Monday that he could stay.

Rafael Nadal, who is tied with Djokovic and Roger Federer on 20 grand slam singles titles, is sixth seeded and will face American Marcos Giron in the first round.

Nadal is in the same half of the draw as Djokovic, but the pair would only meet in the semi-finals if they got that far.

In women’s singles there is a possible match-up in the fourth round between the world number 1 Ashleigh Barty and defending champion Naomi Osaka.

Osaka, seeded 13th, will begin her title defense against Camila Osorio, while Barty’s opponent in the first round will be a qualifier.

Other grand slam champions in this year’s draw include Iga Swiatek, Garbine Muguruza and Simona Halep; Emma Raducanu and Sloane Stephens, winners of the US Open of 2021 and 2017 respectively, have been drawn against each other in the first round.

The state of Victoria announced Thursday that ticket sales for this year’s tournament will be capped at 50% if they haven’t already sold to that level.

The change is being made “to ensure the health and safety of fans visiting Melbourne Park,” a statement said.

Tickets already purchased will remain valid and will not be canceled or changed, and there will be no changes in ground pass access.

Face masks will be mandatory except while eating or drinking, and indoor social distancing measures will be enforced according to the state’s COVIDSafe institutions.

“As the number of hospitalizations and cases of COVID-19 continues to rise in Victoria, these mitigation strategies are proportionate and designed to help limit the spread of COVID-19,” the statement added.

Last year the Australian Open was postponed to February due to the pandemic. Due to a lockdown in the state of Victoria, matches were played without fans for five days. Once lifted, the capacity was limited to 30,000 spectators per day.

DailyExpertNews has contacted Tennis Australia for comment, but has not heard anything yet.

The Australian Open 2022 starts on Monday, January 17 and ends on January 30.