Novak Djokovic has Australian visa revoked again, putting him at risk of deportation 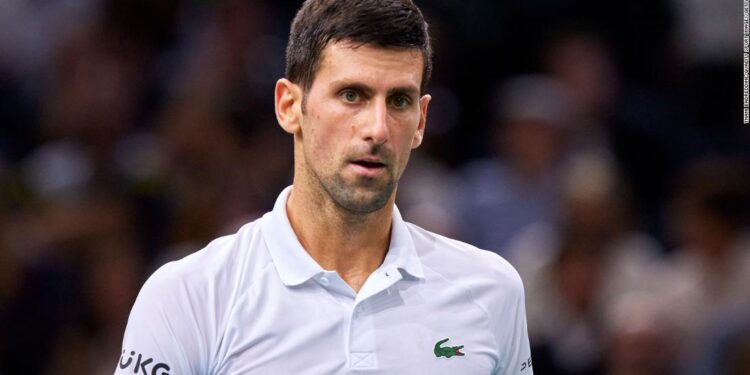 Immigration Minister Alex Hawke announced the decision in a statement Friday, after days of consultations over whether or not to expel the Serbian star from the country.

It is unclear whether Australia will move to deport Djokovic as the decision is still subject to challenge by his legal team.

“Today I exercised my authority under section 133C(3) of the Migration Act to revoke Mr. Novak Djokovic’s visa on grounds of health and good order, on the grounds that it was in the public interest to do so do,” the statement said. .

“In making this decision, I have carefully considered the information provided to me by the Home Office, the Australian Border Force and Mr Djokovic. The Morrison Government is committed to protecting Australia’s borders, particularly with regarding the Covid-19 pandemic.”

The decision comes four days after a judge ruled that Australian Border Force (ABF) agents had been “unreasonable” when they canceled his original visa to enter Australia upon his arrival in the country on January 5. within 30 minutes.
The second cancellation is the latest twist in a saga that has made global headlines and scrutinized Australia’s Covid and immigration policies.

Under current Australian laws, all international arrivals must be vaccinated against Covid-19 – which Djokovic is not – unless they have a medical clearance.

Djokovic said he was under the impression he was allowed in because two independent panels had granted him waivers on the grounds that he was infected with Covid-19 in December. The government argued that a previous infection did not stop him from getting vaccinated.

Despite Monday’s ruling, the immigration minister retained ministerial authority to intervene personally in the case and ultimately had the final say. over whether Djokovic should be allowed to stay, although his decision is subject to appeal.

In his ruling, the judge noted that if Djokovic had been deported, he would have been banned from Australia for three years. In special cases, however, this can be deviated from.

How it came to this

Djokovic arrived in Melbourne on January 5 and was promptly canceled from entering the country without a valid reason why he could not be vaccinated against Covid-19.

He spent several nights in a Melbourne detention hotel, which also houses dozens of refugees, some of whom have been in immigration detention for more than eight years.

His lawyers challenged the decision and won the legal battle on Monday, but questions have since been raised about Djokovic’s behavior after he tested positive for Covid-19 on December 16.

In a statement published on social media on Wednesday, Djokovic admitted that he did not isolate immediately after receiving a positive diagnosis, but denied knowing he had the virus when he attended several public events.

He also apologized for what appeared to be false information on his Australia visa return, specifically that he had not traveled in the 14 days prior to his arrival in the country. Photos taken during that period seem to show him in both Spain and Serbia.

Djokovic said a member of his support staff submitted the information and the omission was a “human error”.

In the statement, Djokovic also admitted to having done an interview and photo shoot with a French sports newspaper while Covid-positive, which he admitted was an “error of judgement”.

The visa dispute and the decision to allow unvaccinated Djokovic – who previously opposed Covid-19 vaccines and vaccine mandates – into the country comes at a time when the number of Covid-19 cases is soaring.

On Friday, the state of Victoria – home to Melbourne which hosts the Australian Open – reported 34,836 cases, with a record 976 people hospitalized with Covid-19. This week, the country surpassed one million cases throughout the pandemic.

Before the decision, Serbian President Aleksandar Vučić said he was “proud” to help the tennis star during the visa dispute, but acknowledged that it was “necessary for people to be vaccinated”.

He also appeared to be indirectly addressing Djokovic’s admission that he did not immediately isolate after testing positive for Covid-19 in December.

“If you know you are infected, you should not go out in public,” Vučić said in an interview with the public broadcaster Radio Television of Serbia (RTS).

Meanwhile, Serbian Prime Minister Ana Brnabić told the BBC it would be “a clear violation of the rules” for Djokovic to be at a public event after knowing he had tested positive.