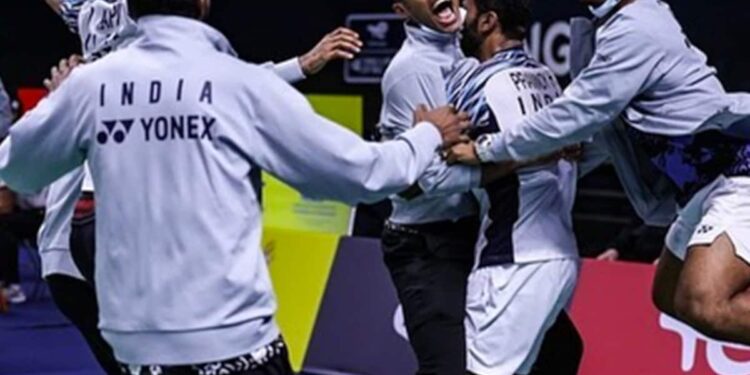 HS Prannoy put in a lion-hearted effort in the decisive fifth match as the Indian men’s badminton team made history by reaching the Thomas Cup final title fight for the first time ever with a 3-2 victory over Denmark in an edge-of-the-seat semifinal in Thailand. The Indian team, which never made it past the semi-finals after 1979, showed tremendous fighting spirit as it emerged from a match to outsmart the 2016 champions. While the world championship silver medalist Kidambi Srikanth and the world’s No. 8 pair, Satwiksairaj Rankireddy and Chirag Shetty, kept India in the hunt, it was once again left to Prannoy to take the team home as the score at 2 -2 stood. Against the world No. 13 Rasmus Gemke, Prannoy suffered an ankle injury after slipping on the front lane during a return, but the Indian continued after a medical time-out. He looked sore and his range of motion on the pitch also seemed limited, but for all the odds he produced a sensational performance to beat the trumps of 13-21 21-9 21-12 and etch India’s name in the history books.

“Mentally everything went through my head. After the slip it hurt more than usual and I couldn’t turn out well and I thought about what to do,” said Prannoy after the draw.

“In my mind it always came down to not giving up, just try and see how it goes. I prayed the pain didn’t get worse and it started to subside towards the second game and by the third I was much better to feel.” “The tactics we used in the second and third games were very crucial. The strategy was to keep the pressure on and I knew that if I come into the second half with a good lead there is a good chance of winning the game. And I told myself to push these 11 points and the strategy worked,” he added.

It was a creditable achievement by the Indian team, who had waited 43 years on Thursday to reach the semi-finals with a 3-2 victory over five-time champions Malaysia, a feat last achieved in 1979.

It would always be an uphill task for India to tame formidable Denmark, which in 2016 became the first European country in history to secure the title.

Many rode on world championship bronze medalist Lakshya Sen, given his recent victory over Viktor Axelsen at the German Open Super 300, but he was unable to replicate his feat as the world number one took a comfortable 21-13 21-13 victory. Denmark held a 1-0 lead.

Denmark decided to split their number 9 pair in the world, Kim Astrup and Anders Skaarup Rasmussen, into two halves, with Astrup playing in the first doubles match with Mathias Christiansen.

Rankireddy and Shetty, however, delivered a rough performance and kept their nerves in the final stages to beat Astrup and Christiansen 21-18 21-23 22-20 to bring India back into the game.

The Indian pair got five match points – two in the second game and three in the third game – before converting one to bring the joy back to the Indian camp.

India’s second double play by Krishna Prasad Garaga and Vishnuvardhan Goud Panjala was no match for Rasmussen and Frederik Sogaard, however, losing 14-21 13-21 as the score stood at 2-2 after the fourth match.

The experienced Prannoy then lost the opening game, but unimaginably led 11-1 in the second game, despite an injury. He relied more on his attack to collect points, even though Gemke failed to put pressure on the Indian.

Prannoy dominated the forecourt and soon roared back into battle with Gemke making too many mistakes.

Prannoy, ranked 23rd, imprinted his authority with his trademarks while Gemke’s defense was in tatters. The Indian led 11-4 at the break and continued to dominate the game.

As the Impact Arena reverberated with the chants of “HSP”, Prannoy took nine match points with a straight down the line smash and sealed it at the second chance as his teammates gathered together to celebrate.