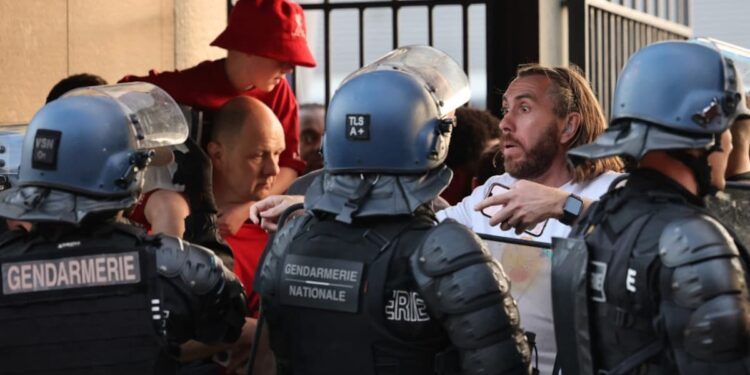 The police are standing in front of the fans in the run-up to the Champions League final.© AFP

The Champions League final between Liverpool and Real Madrid in Paris started more than half an hour later than scheduled, as it had been postponed “due to a safety issue”, UEFA said on Saturday. The match was set to start at 9pm (1900 GMT) at the Stade de France, but in-ground announcements said the delay was caused by the “late arrival” of supporters. After a delay, the teams lined up in the tunnel when the opening ceremony started 36 minutes late.

Police sources told AFP supporters tried to force their way through the first ticket checkpoint outside the stadium – located in the northern Paris suburb of Saint-Denis – but access to the venue remained “watertight”.

Tear gas was fired by police after several dozen people tried to climb over barriers, according to an AFP journalist on the scene with about 20 who succeeded and fell into the ground.

With half an hour to go before kick-off, thousands of supporters were still outside the stadium.

“For safety reasons, the kick-off of the UEFA Champions League final has been delayed by 15 minutes,” UEFA tweeted, although that delay was likely to lengthen as the Liverpool players returned to the pitch to warm up.

At the time the match was due to start, there were still large areas of empty seats on the official Liverpool side of the 80,000-seat stadium.

Some 6,800 security forces were deployed for the event, with between 30,000 and 40,000 Liverpool fans without tickets to the final expected in Paris.

A fan zone with a capacity of more than 40,000 has been set up for them on an avenue in the east of the French capital.

About 20,000 fans from each club were officially given tickets to the match.