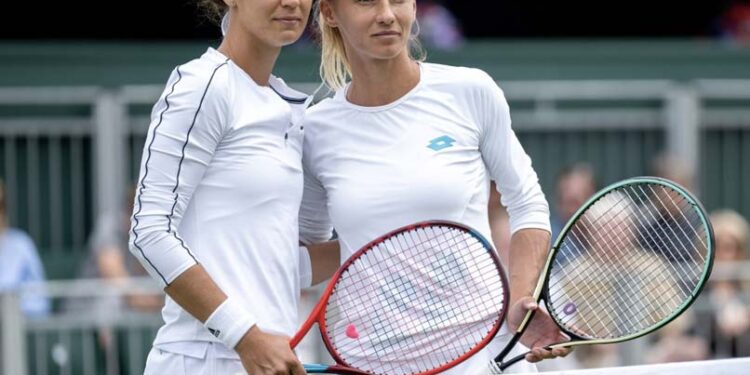 Ukrainian tennis player Lesia Tsurenko on Wednesday criticized Russian “lies” about a rocket attack on a shopping center, saying she knew people affected by the attack after reaching the third round of Wimbledon. Tsurenko, who wore a ribbon in the Ukrainian colors, recovered from losing the first set and defeated compatriot Anhelina Kalinina 3-6, 6-4, 6-3. The 33-year-old said both players felt “great support” on Court 12 as fans waved Ukrainian flags. In her press conference after the match, she said she had received permission from Wimbledon chiefs to wear the ribbon, referring to the “terrible things going on in Ukraine”.

“Especially it is very painful for me to see that Russian propaganda only says that, for example, that shopping center in Kremenchuk did not work,” she said.

“That’s a lie, because my fitness coach, he’s from that city. His mother-in-law… she works at this mall and she was lucky she had a day off.”

“He and his father, they were not far from that place… the father fell from the (shock) wave.”

A Russian missile destroyed the shopping center in the central city of Kremenchuk on Monday, killing at least 18 civilians, according to local officials.

The Russian army said it hit a nearby weapons depot the next day, with the explosion starting the fire in the center, which Moscow said was “not operational” at the time.

Tsurenko said she felt powerless and “extremely guilty” over the situation in her war-torn homeland, which was invaded by Russia in February.

“I feel like I can’t seem to do anything,” she said. “So all you have to do is keep playing, and like I said, I’m donating 10 percent of my prize money.”

Tsurenko said she supported Wimbledon’s decision to ban Russian and Belarusian players from the Grand Slam.

She said she had heard from only one Belarusian and one Russian player that they were against the war.

“I thought I had a lot of friends on tour, especially from Russians and Belarusians,” she added.

Tsurenko, ranked 101, urged people around the world to help if they could.

“If they think donating $10 means nothing, no, it isn’t,” she said. “It means a lot. In the city, in the main city of my region, the Mykolaiv region, they have been without water for a few months.

The player said her driver from the hotel to Wimbledon received two people from Ukraine at her own home on Wednesday, describing such assistance as “amazing”.

“I’ve been to the Polish border with Ukraine and seen hundreds, thousands of people,” she said. “They just don’t know where they’re going. They have their whole lives in two pockets.

“They have children, grandfather, grandmother maybe with them, and some of them disabled as well. And they are lost. So all the support you give to Ukrainians is great.”