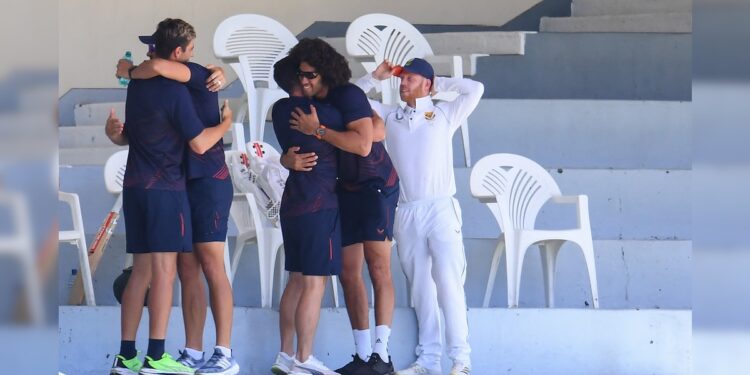 South Africa head coach Mark Boucher on Friday ranked the remarkable, come-from-behind 2-1 series win against World No. 1 India as one of the best in their Test cricket history. Trailing 0-1 after losing the Boxing Day opening test at Centurion, the Dean Elgar-led squad showed tremendous resilience to win consecutive games at the Wanderers and Newlands to upset the regular favourites.

“To put it in perspective, we lost three pitches. A lot of people, including some from the media, had written us off after day one of the first Test of the series,” Boucher said in the media interaction after the game.

“So to come back after losing the first test badly and then win the second test and now win the third test is pretty incredible.

“It will be at the top there – in the top five it has to be. Where we come from, the things on the pitch and off the pitch… It’s good to get good results.

“The way the whole Test series was played was hard fought, good cricket, it has to be up there with some of the best Test series played in South Africa.”

‘Will take a lot of confidence out of this triumph’

Going into the series, the hosts had little experience as they played their first test in six months at Centurion. They played just six Tests under new captain Elgar as Australia chose not to travel for a run of four games last March.

Elgar started his journey with a 2-0 win over the West Indies before losing to India in the Boxing Day Test.

“It’s definitely something we can take a lot of confidence from. This team really has a mission. We’ve been going through some tough times lately and they’ve been riding in a pretty special way.

“I’m incredibly proud of where they’ve come from in such a short space of time and the results are now starting to come through, which is fantastic.

“Our feet are firmly on the ground. We know we are not the finished product. We have goals ahead of us. So we will enjoy this victory,” said Boucher.

Going into the fourth day’s play, South Africa started from 101 for two and completed the task with a whopping seven wickets in hand.

“These guys deserve it. They have been through a lot together as a unit. So it’s just nice to see that.

“It’s a close-knit group of guys. The World Cup was a huge disappointment, although we played good cricket all the time.

“It’s just something that was really needed in our dressing room to work hard.”

‘Not surprised with character shown’

In both tests, the inexperienced side under Elgar were given tricky targets of over 200 in resilient conditions.

Elgar led the way in Johannesburg, helping the side chase 240 in a seven-wicket win.

Here, Keegan Petersen scored the highest score with 82 – his third consecutive Test fifty – as the hosts chased the 212-run goal.

“I’m not surprised because you also have Dean, who has such a character who is at the forefront.

“You have Temba (Bavuma) as the vice captain who is the same fighter with that spirit in him, so you have two such leaders who are going to follow the guys.

“The guys also stood up regarding their own games.” Boucher added: “To put these things in perspective about where this team is and where the Indian team is… They are probably the best team in world cricket right now.

Loss of words for Keegan

For South Africa, Petersen and 21-year-old lanky left-arm pacer Marco Jansen were the finds of the series.

Boucher, full of praise for the duo, said: “You get two youngsters that have just come out on the side. They both deserve their little spotlight.” Petersen, who was only playing his second series after a mediocre debut against the West Indies in June, impressed with his solidity and composure at number 3.

The 28-year old scored three fifties in four innings and improved his score each time to be named Man of the Series. He was also the Man of the Match in their series win here.

“But he’s always shown signs of the player we see now. He just stuck with his weapons. He’s in a good position to have a guy like Dean next to him. He (Dean) really supports him.

“He is a hard nut and hits number 3 in Test Cricket. You have to be tough, you have to know your game, technically you also have to be healthy. Hopefully he just gets better, better and better.”

“It is a very difficult position to play in South Africa under our circumstances, hitting number 3. The way he has come through the series, I have no words. In a big series, against big players and for the Man of the Series, he totally deserved it,” Boucher said of Petersen.

The uncapped left arm sailor Jansen was a revelation, growing from strength to strength after an unimpressive debut in the Boxing Day test.

“If you lose a man like Andre Nortje (hip injury), it was a big loss for us, but then you get Marco out. We’re in a really good space at the moment.” “A lot of people doubted his selection in the first Test. He didn’t start too well and the media kind of jumped on him, which I thought was rather unfair,” he said of Jansen.

“But we saw what he had in Pakistan. He was with us in the West Indies and it was only a matter of time before he came through because we can see the skills he has and the variety.” With an average of 16.47, Jansen finished with 19 wickets, behind their best wicket taker Kagiso Rabada (20).

“Looking at him now and probably everyone looks the same, what a find we have, another addition to our bowling attack. He still has a lot of cricket to learn. We also find a superstar in him. He’s just about getting better to be,” he said.

‘We’ve been around the corner for a while’

The head coach went on to say they have turned the corner after some forgettable performances in the recent past, including a group stage exit in the 2021 T20 World Cup.

“I believe we turned the corner a while ago. Our results have been pretty solid for the past six months to a year.

“We had the chance to try out a few players. I think that’s starting to work out now as we started to get a depth of cricketers to fall back on,” he signed.