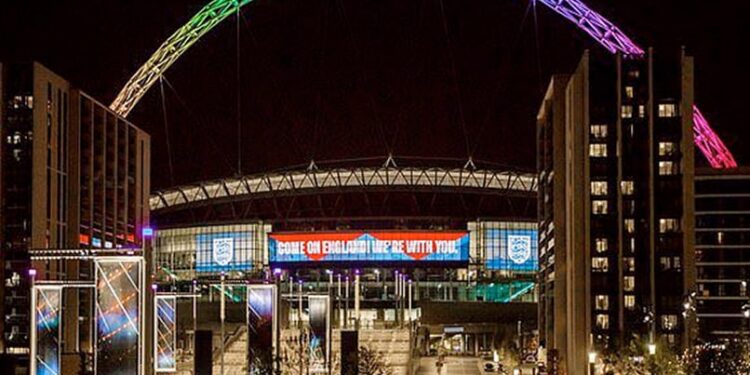 Wembley was lit up in rainbow colors on Friday ahead of the England v United States World Cup match as a show of support for the LGBTQ community. England was one of seven European nations to backtrack on plans for captains to wear rainbow-themed armbands with the message “One Love” at the Qatar tournament, under threat of sporting sanctions from FIFA.

The FA has lit up the Wembley Arch in rainbow colors to show solidarity with the LGBTQ+ community after deciding England captain Harry Kane would not wear the OneLove bracelet at the World Cup in Qatar. pic.twitter.com/LyJH2KMDiA

In response, Germany posed for a photo with their hands over their mouths ahead of Wednesday’s 2-1 defeat to Japan with a statement from the German Football Association saying that “human rights are non-negotiable”.

The Football Association of England (FA) has been criticized at home for backing down from wearing the armband.

“Trying to eliminate all forms of discrimination, including homophobia, in football is something that everyone at the FA strongly believes in and has been working towards for a number of years,” the FA said in a statement.

“The FA will continue to show our support for the LGBTQ+ community and all communities throughout this tournament and long beyond, starting with lighting the arch of Wembley Stadium in rainbow colors ahead of Friday night’s game with the USA. #OneLove # FAForAll.”

The display of the rainbow has proven to be a major talking point in Qatar, where homosexuality is illegal, with some spectators being ordered to remove garments bearing the logo during the early stages of matches.