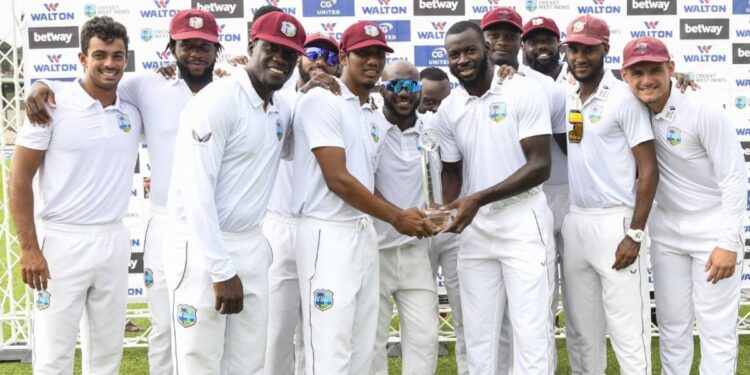 The West Indies wasted no time on a day when more than five hours were lost to the elements to take a 10-wicket win over Bangladesh on the fourth day of the second and final Test in St Lucia on Monday. Frustrated by torrential overnight showers that left a soggy outfield and prevented play until mid-afternoon, the home side quickly claimed the last four wickets despite an entertaining, unbeaten 60 by Nurul Hasan to sack the visitors for 186 in their second innings after they were down resumed in the already precarious position of 132 to six.

That left captain Kraigg Brathwaite and opening partner John Campbell with the formality of knocking off the 13 runs needed for victory in under three overs for another extended triumph and a 2-0 sweep of the series.

“Our confidence levels were really high in this match after that first Test win,” said Brathwaite.

“There is always room for improvement, but it was good to see us fight back on the second day from a difficult position against the Bangladesh bowlers.

“It is especially gratifying to see our plans now becoming a reality as we know it will be very difficult for our next test series in Australia at the end of the year, but we believe we can put up a good fight there,” he said. he added.

It extended the winning streak of the West Indian Test match to three games after a series win over England at the end of the series in Grenada three months earlier.

Kyle Mayers, whose 146 was the crutch of the West Innings’ first innings totaling 148, won both the Man of the Match and Man of the Series awards.

Any fear of being frustrated by lower-order resistance from Bangladesh dissipated within minutes of play started, as Alzarri Joseph Mehidy caught Hasan Miraz behind in a lifting delivery.

Nurul, who impressed with a second-innings century in the seven-wicket loss in the first Test in Antigua a week earlier, looked to be getting into cue mode with a succession of extravagant shots, his unbeaten half-century came from only 50 balls and embellished with six fours and two sixes.

But impressive as he was on the strike, the wicketkeeper batsman was powerless to prevent the demise of his teammates as Jayden Seales removed Ebadot Hossain and Shoriful Islam while last man Khaled Ahmed was knocked out by a direct hit from Campbell on the striker’s failure to end another generally meek attack attempt in Bangladesh.

Joseph, Seales and Kemar Roach each claimed three wickets in the innings.

For Shakib al Hasan, back in the role of captain after a long spell on the Test side, this experience opened his eyes to possibilities.

“We have a long break before our next test series, so we need to take the positives, especially the encouraging performance from our fast bowlers, and make sure we’re ready in five months,” he said.

“We need to be mentally stronger in our at bat to compete with the best teams in the world, but our biggest improvement in the last three to four years has been with our fast bowlers.

“So while the fast bowlers work really hard and get the results, we generally need to improve as a team to be more competitive in Test cricket outdoors.”

Both sides are now gearing up for the cue ball formats with the three-game T20 International series starting next Sunday in Dominica, after which they will meet in three One-Day Internationals.