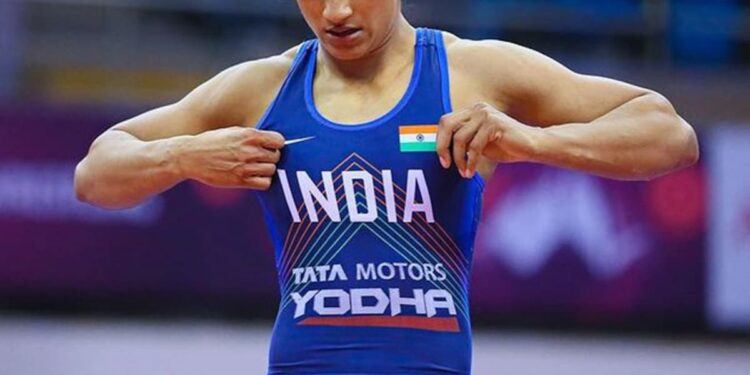 India’s Vinesh Phogat made history at the World Wrestling Championships in Belgrade on Wednesday, when she joined an elite roster of Indian wrestlers to win multiple medals at the marquee. She defeated Sweden’s Emma Malmgren 8-0 to win the bronze medal. It was her second medal at the World Cup. She also previously won bronze in the 2019 edition. She is the first Indian female wrestler to win two medals at the World Championships.

On Tuesday, Vinesh suffered a shocking 7-0 defeat to 2022 Asian Championship silver medalist Khulan Batkhuyag of Mongolia in the qualifying round. The Indian wrestler was 3-0 behind Batkhuyag at the end of the opening round and had to take four more points in the final moments to lose the match.

Khulan Batkhuyag stormed through to the final by winning her next matches, giving Vinesh Phogat a shot at the bronze medal. However, the road was not an easy one for Vinesh as he had to win three repechage rounds on his way to the medal.

In her first repechage match on Wednesday, she defeated the 2018 Asian Games silver medalist Zhuldyz Eshimova of Kazakhstan 4-0. She earned a Victory by Fall (VFA). Her next match saw her win against Azerbaijan Leyla Gurbanova on the basis of Win by Injury (VIN). After winning this competition, she advanced to the bronze medal competition.

Also, the 2021 U-23 bronze medalist Nisha Dahiya will struggle for a bronze medal. Nisha had advanced to the semifinals after beating Bulgarian Sofiya Hristova Georgieva. She took a victory based on Superiority aka Technical Fall (VSU) 11-0.

But in the semifinals, she lost to Ami Ishii from Japan 5-4 on VPO1 (points and opponent scores). She will have to compete for the bronze medal. Her opponent has not yet been decided.

The 2022 World Wrestling Championships started in Belgrade on September 10 and will last until September 18.