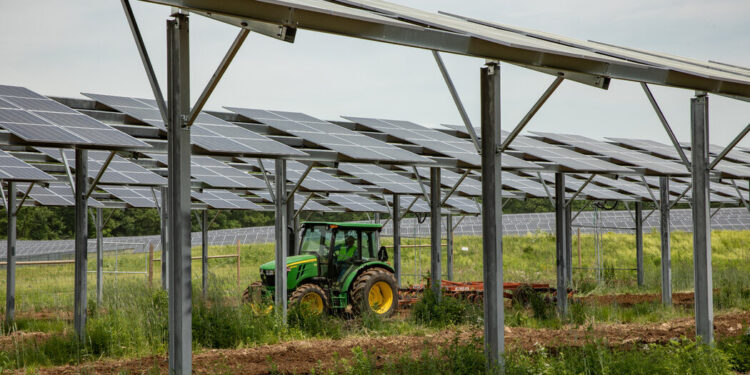 In its 150-year history, Paul Knowlton’s farm in Grafton, Massachusetts, has produced vegetables, dairy products and, most recently, hay. The evolution of farm use led to changing markets and a variable climate. Recently Mr. Knowlton, however, added a new type of cash crop: solar.

for mr. Knowlton, a fifth generation farmer and current owner, it was an easy decision. He had already installed solar panels to power his house and shed. When a real estate agent knocked on the door to see if he was interested in leasing a small portion of his land for a solar panel, “she planted the seed that I could do more,” Mr. Knowlton said.

Mr. Knowlton looked at several companies, but was most impressed with BlueWave Solar, a Boston-based developer primarily focused on solar installations and battery storage, which allows excess electricity to be fed into the grid. Soon, two small plots of largely unused land were home to low-to-ground panels that produce power. This year, Mr. Knowlton takes it one step further: On a third lot, solar panels will share space with crops so that both can thrive.

This approach is called agrivoltaics – a portmanteau of agricultural and voltaic cells, which convert solar energy into electrical energy. Also known as dual-use solar, this technology involves adjusting the height of solar panels to a whopping 14 feet, as well as adjusting the distance between them, to accommodate equipment, workers, crops and grazing animals. The spacing and angle of the panels allows light to reach the plants below and has the added benefit of protecting those crops from extreme heat.

The electricity generated is uploaded to the grid, usually via nearby substations. While some of the electricity may find its way to the host country, the projects are intended to provide power for general use. And such solar installations provide an alternative source of income in the form of payments to landowners such as Mr. Knowlton or a reduction in lease payments for tenants.

BlueWave has mainly focused on designing the projects and then selling them to companies that build and oversee them. The Grafton project, for example on Mr. Knowlton, is now owned by the energy company AES Corporation.

“Agrivoltaics not only promote the need for clean energy, but they are also critical to maintaining working farms,” said John DeVillars, one of BlueWave’s three co-founders and chairman of the board.

Dual-use solar became interesting more than a decade ago because “big installations in the middle of nowhere aren’t going to solve all of our energy problems — transporting that energy can be very expensive,” said Greg Barron-Gafford, a biogeographer and researcher. assistant professor at the University of Arizona. Farms in many parts of the country are located in peri-urban areas, transition zones from the countryside to the urban area. Their proximity to major urban areas makes open farmland particularly suitable for solar panels, but in the past, without any co-existing agriculture, that kind of placement could create a conflict over whether food or energy production should prevail.

A study by AgriSolar Clearhouse, a new collaboration to connect farmers and other landowners with agrivoltaic technology, also showed that the installations promote growth by protecting crops from rising temperatures and helping to conserve water. While the technology in the United States is still in its infancy compared to countries in Europe, where the technology has been used for more than a decade, federal regulators, academics and developers alike are working to address that disparity.

Early results are promising, said Garrett Nilsen, the acting director of the US Department of Energy’s Solar Energies Technologies Office. “There’s a project in Arizona where they’ve seen a threefold increase in crop yield when they’re under these types of systems and up to 50 percent less irrigation needs,” because the panels provide shade, he said. In addition, the plants beneath the panels release water into the air, cooling the modules, creating a “symbiotic relationship between the plants and the panels”, as Mr Nelson described.

BlueWave’s first project to go live is a 10-acre farm in Rockport, Maine – now owned and operated by Navisun, a solar energy producer. Wild blueberry cultivars have been planted under solar panels, which will produce 4.2 megawatts of power; the project is estimated to produce 5,468 kilowatt-hours annually — equivalent to the amount of power needed to power about 500 U.S. households.

Unlike Massachusetts, Maine doesn’t offer significant incentives for using solar, so there was a 10 to 15 percent premium on costs compared to similar projects, which BlueWave included, Mr. DeVillars said. (That practice is consistent with the company’s status as a so-called B Corporation, which requires a commitment to social and environmental causes.)

Other players clearly see the potential of agrivoltaics: On May 12, Axium Infrastructure, an investment management company, announced the acquisition of BlueWave. Trevor Hardy will remain as chief executive and Eric Graber-Lopez will remain president, while Mr. DeVillars will become chairman emeritus.

Mr Hardy said the sale would enable BlueWave to expand so that it will own and operate, not just develop, solar and battery storage. Ultimately, he said, “sales puts us in a stronger position for dual use.”

“Farmers work for the long term,” he continued. “It’s more appealing to drive on farm roads and sit at their kitchen tables with the owners and say we’re developing, owning and operating the plant.” And the potential of the technology goes well beyond blueberries; agricultural uses include vineyards and shrimp farming.

BlueWave is not the only agrivoltaic developer. According to the Fraunhofer Institute for Solar Energy Systems ISE, based in Germany, five megawatts of power were produced by these systems in 2012; by 2021, 14 gigawatts of power would be generated in dual-use systems — roughly equivalent to the electricity needed annually by about two million U.S. homes, according to a spokeswoman for the Department of Energy’s technology agency. And the technology is evolving rapidly; in the few years since the installation on Mr. Knowlton, adjustable panels have been developed that can move to, for example, absorb the sunlight as much as possible.

“It doesn’t always pay to be a pioneer and it can be quite challenging at times,” says Mr. Hardy, who grew up in a South African farming family. Finding suitable sites – with enough sun and proximity to a substation or other electrical infrastructure – can be difficult. Opposition from neighbours, especially where panels are visible from other houses or even the road, is not uncommon.

Indeed, BlueWave was one of several defendants named in a lawsuit over a proposed agrivoltaic energy plan in Northfield, Massachusetts. A state court recently ruled that the neighbor had a right to challenge the proposed development. One of the plaintiffs, Christopher Kalinowski, said one of his concerns was that his views would be obstructed and that “the area will lose farmland”. (Mr. Hardy declined to comment on the lawsuit.)

In addition, some chapters of the nonprofit environmental organization Audubon have spoken out about the technology’s potential effect on wildlife. Michelle Manion, the vice president of policy and advocacy for Mass Audubon, said that while her organization supported renewable energy, including solar within agricultural operations, “we want to maximize the deployment of ground-mounted solar in some of our countries.” those least ecologically sensitive first.”

And there are general concerns that even with dual-use solar panels, arable land could be lost, although BlueWave says the land could be returned to pure agricultural use once the solar leases — typically 20 to 30 years — expire.

But one of the main obstacles is cost. The skyrocketing cost of steel has a direct effect on agrivoltaics’ emphasis on raising the panels from 10 to 14 feet. “For every foot you go up, you have to go two feet into the foundation,” explained Mr. Hardy. “It is a challenging industry when you consider what we need to do to achieve the climate goals. But we’re keeping track.”

But in the end, it all depends on how the crops taste: if the taste or even the look is too different from traditional products, the technology will be hard to sell. But in an early study, researchers at the Biosphere 2 Agrivoltaics Learning Lab at the University of Arizona found that tasters preferred potatoes, basil and squash grown with agrivoltaics. However, beans can take some time: the small number of tasters preferred the traditionally grown version.