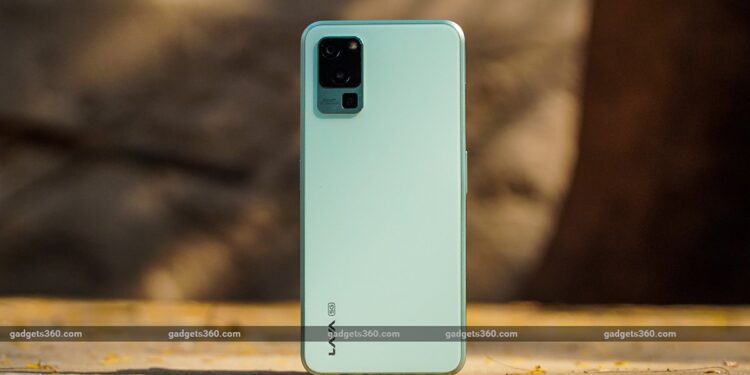 Once a popular Indian smartphone brand, Lava faded into the background in recent years as industry heavyweights like Samsung and big money Chinese brands like Realme and Redmi took over the mainstream smartphone landscape quite a bit. However, Lava marked its resurgence in 2021 with the Lava Z series. Last year, the company also launched its first 5G smartphone in India, the Lava Agni 5G (Review). Now that the 5G rollout is complete, Lava aims to attract buyers who want the 5G experience while spending as little money as possible. For such customers, the company has launched the Lava Blaze 5G.

The Lava Blaze 5G currently holds the title of ‘Most Affordable 5G Smartphone’ in India. The smartphone comes with a MediaTek Dimensity 700 SoC, a “glass back design” and a triple camera setup. Should you consider purchasing the Lava Blaze 5G? Here’s our review to help you find out.

The Lava Blaze 5G can be purchased in a single option of 4 GB RAM + 128 GB storage. The device is available in two colors: Glass Blue and Glass Green. It was available for an introductory price of Rs. 9,999 in India when it launched, but it is currently listed for Rs. 10,999.

Despite being a budget smartphone, the back of the Lava Blaze 5G is made of glass, which is quite impressive. The device is comfortable to hold, but feels a bit heavy at 207 g. The color Glass Green that Lava sent us also has a matte finish. If you are someone who likes a pastel shade, you must like this color. While the back panel is glass, the flat frame around the phone is made of plastic materials.

The Lava Blaze 5G comes with a USB Type-C port sandwiched between the down-firing single speaker and the headphone jack. On the right side is the power button that doubles as a fingerprint scanner. The volume buttons on the left edge provide good feedback. The phone comes with a hybrid SIM card slot, with support for up to 1 TB of expandable storage via a microSD card.

The Lava Blaze 5G comes with a two-tone rectangular camera module on the back that doesn’t stick out that far. On the front, the Blaze 5G has a waterdrop notch at the top of the screen. While the side and top bezels are quite thin, the device gets the typical budget treatment with a thick chin bezel.

The Lava Blaze 5G comes with a 6.5-inch IPS LCD with an HD+ resolution (720×1600 pixels). The screen also supports a 90Hz refresh rate for slightly smoother animations and scrolling experience. The viewing angles are surprisingly good. The screen is fairly bright and can be read outdoors in daylight, provided you set the brightness to the maximum setting. The Lava Blaze 5G comes with a WideVine L1 certification, but Netflix detected a WideVine L3 certification on our device.

The highlight feature of the Lava Blaze 5G is in the name. With support for eight 5G bands, the device is currently the most affordable 5G smartphone in India and comes with a MediaTek Dimensity 700 SoC. We have seen the chipset in other budget smartphones under Rs. 15,000 in India, including the recently launched Redmi 11 Prime 5G (Review). The phone also comes with a 5000 mAh battery. While it supports 15W fast charging, the Blaze 5G comes with a 12W dual-USB port charger in the box. In terms of connectivity, the phone supports Wi-Fi 802.11 ac, Bluetooth 5.1, GPS, etc.

The Lava Blaze 5G offers a clean, bloatware-free software experience running Android 12. There was no lag per se and the overall experience for everyday tasks was quite good. The company has promised to roll out the Android 13 update, but the timeline remains unknown. Lava has also promised to provide quarterly security updates for two years. At the time of writing, our test sample had the September 2022 Android security patch.

The Lava Blaze 5G had no issues performing basic day-to-day tasks. Whether it’s scrolling through social media or switching between apps, the phone performed well. RAM management wasn’t as aggressive, but some heavy apps running in the background reloaded when I switched back to it. This is despite the multitasking window showing that the phone had about 2 GB of RAM available.

I also played a few games on the Lava Blaze 5G. Call of Duty: Mobile took a little longer than usual to load for unknown reasons. The game supported ‘Medium’ graphics and ‘High’ frame rate settings, resulting in an average frame rate of around 40 fps. The overall gaming experience was decent, but there were occasional hiccups. For those who want a casual gaming experience, the Lava Blaze 5G can do a decent job.

The 5000 mAh battery easily lasted more than a day, thanks to the not-so-hungry SoC and HD+ screen resolution. In our battery loop test, the Lava Blaze 5G only ran for 11 hours and 56 minutes, which was surprisingly below average. The included charger took over three hours to charge the phone from zero to 100 percent.

For biometrics, the Lava Blaze 5G has a side-mounted fingerprint scanner, which can be quickly verified. It also supports AI face unlock which, while snappy to unlock the device, is less secure compared to the physical scanner.

The Lava Blaze 5G has a triple camera setup on the back. However, only one of them is really useful. There’s a 50-megapixel main camera sensor, along with a 2-megapixel macro camera and a VGA sensor. For selfies, the phone comes with an 8-megapixel front camera.

The Lava Blaze 5G has a dual-tone camera module design

The main camera on the back does a good job when it comes to taking pictures in daylight. While the dynamic range is poor, the sensor manages to capture good detail. However, it tends to enhance the colors. Another thing to note is that the highlights are mostly blown out in an effort to get some detail in the shadows. In low light, the main camera takes decent photos, provided there is some ambient light. However, the lack of any kind of stabilization results in jerky images with some loss of detail.

I liked the front camera more which was very accurate in capturing the actual skin tone. However, it does smooth out the skin textures a bit. Portrait mode performance was also quite good for a phone priced at Rs. 10,999.

The Lava Blaze 5G can record up to 2K videos with the rear camera, while the front camera can record 1080p videos. In general, the videos shot with the Lava Blaze 5G offer slightly boosted colors with decent detail. The dynamic range is also quite good, something I did not expect from the device.

The Lava Blaze 5G gets it right in many areas when it comes to a budget 5G smartphone. While the camera’s performance is its weakest link, it scores points for its design and performance. Battery life, while decent in actual use, underperformed in our video usage test. The device also offers a whopping eight 5G bands in India. The display experience is also above average for a smartphone in this price segment.

Lava’s target audience for the Blaze 5G is someone who wants to try 5G without spending too much. There are a few shortcomings, but when you look at the price tag, it’s hard to complain too much.